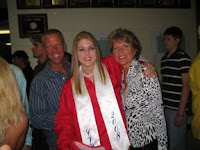 The graduation went off beautifully. We had that great cookout at our daughter, Leslie's at noon. I fixed some great baked beans and potato salad. I also baked a chocolate cake. John, our son-in-law made some great hamburgers. Leslie made homemade banana ice cream It was all wonderful. Ashley got some great gifts and quite a bit of money. Her mother and her other grandparents were there too. Even her boyfriend, CJ was there.

Then this evening they had the graduation. Ashley had received three awards at the awards assembly yesterday. She lettered as a basketball coach, as well as medaled in forensics. She had to drop out of track after pulling a muscle.

But I digress. The graduation went off flawlessly. We got some pictures although I took mine afterward.
Posted by Margie's Musings at 10:04 PM No comments: 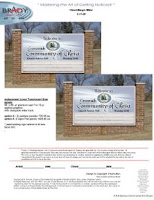 Well, we finally got our new sign painted at the church. The other one wore off after eight years. This one has a five year warranty but Darren Brady, our sign painter, told me to give him a call if we had any problems and he would keep us happy. The sign looks lovely. It took a month longer then I thought to get it done because the weather has been so unpredictable. I went out there and met him on Wednesday afternoon after he finished it and paid him for it. Sunday, the congregation will see it for the first time. I hope they are as happy with it as I am. This one is the official colors and font for the world church.
Posted by Margie's Musings at 6:19 AM 4 comments:

Well, our son, Scott came in day before yesterday. He has been transferred to Fort Leonard Wood from Georgia. He is here for his daughter's graduation. He will be going to Lebanon, Missouri Monday to sign the paperwork on a lease on a house and get his furniture moved in after the first.

That will put him 25 miles from the Fort but only 60 miles from Branson, which will be handy. I love to go to Branson a couple of times in a year. He should be there three years.

Today, he will pick up his daughter after the class picnic and spend the afternoon with her. She will be moving to Texas this weekend to live with her mother and attend Tyler Community College this fall.

It will be awhile till we see her again.

By the way, visit the cybercommunity at this link. Just copy and paste it into your browser.

http://www.thecybercommunity.net/board/index.php
Posted by Margie's Musings at 7:59 AM No comments: 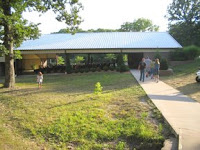 Last evening, our Mission Center president e-mailed me that our historic reunion grounds, the Ozark Campgrounds, had been hit by a tornado on Saturday night, doing much damage.

We don't know, at this point, how bad the damage is but have been told that there was extensive damage. It is located west of Neosho Missouri and east of Seneca, Missouri, which sustained major damage too.

In the past few years, we had been in the process of redoing cabins with cement board siding and sheet rock in the interiors. Three years ago, we built this new tabernacle. Several years ago we built a new dorm facility, Heritage Hall. The dining area had been redone in the early 90's. It was looking pretty good and we had been using it for youth camps and two reunions, as well as retreats. This will mean that we will have to reschedule camps and reunions this summer, perhaps cancel them. We had just begun to build a new swimming pool. I don't know at this early stage just how much that has been set back.

Also, in the off season, we had been renting the facility to other churches and groups for their camps and family reunions. That will also be impacted.

The next few days will tell. Below is a picture of the grounds
following the tornado on Saturday . The first picture is the a cabin at the grounds, then the RV park, barn and RV restrooms. The third picture is the restrooms and barn at the RV park. The bottom picture is the damaged Heritage Hall. More pictures, including a slide show of twenty or more pictures can be found At this link.
http://www.southcentralstatesmissioncenter.net/ If the link does not work, copy and paste it into your browser. 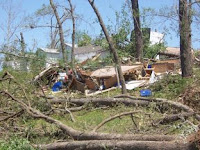 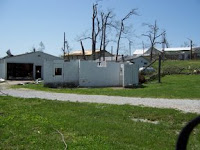 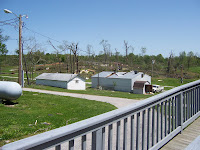 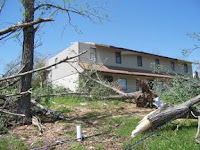 Posted by Margie's Musings at 3:50 AM No comments:

Well, we had a Mother's Day dinner here today after church and it turned out well. Everyone seemed to enjoy the dinner and after they all left, I cleaned up the mess.

My daughter left my card at home so for the first time, I didn't get a Mother's Day card. No big deal. Neither of my sons remembers to send them. They are both very involved with their own lives. My youngest son did call though early this morning. That's better then a card. He will be here on Wednesday to stay a few days for his daughter's graduation Saturday night before going over to Fort Leonard Wood to find an apartment. That will make him about four and a half hours away from us for the first time in years.

Jerod, his son, is in the Coast Guard and in his basic training so it will be another month before my son can go see him.

We will go to our granddaughter's Baccalaureate tonight at 7:00 over at Caney.
Posted by Margie's Musings at 2:40 PM No comments: