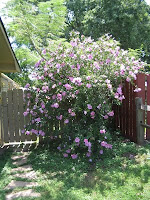 We dug up several Rose of Sharon this morning and took them out to John and Leslie's. They will find an appropriate place to plant them around their house. Ours are absolutely beautiful as you can see to the right here.

Tomorrow is church and I have the light breakfast. I will take my breakfast strudel, juice and chocolate milk. Everyone seems to enjoy the chocolate milk and if I fix any other thing but the strudel, Leslie is disappointed.

We received the Herald this morning and I sat down and read it cover to cover. I am getting excited about going to John Whitmer Historical Association meeting later in September. I will moderate one session with two presenters.

Tomorrow evening we have our Living the Questions group. This is Bob and I, a retired Methodist minister and his wife, one other Community of Christ woman, two Presbyterians, four other Methodists and two Baptists. We are now studying and discussing the book, "Seeing Grey in a Black and White World". We have viewed the video and it has been returned. We always enjoy the company of these folks and some of them are going to attend the Peace Colloquy with me in October. They have done that for four years now. That's exciting in itself.
Posted by Margie's Musings at 1:10 PM No comments: 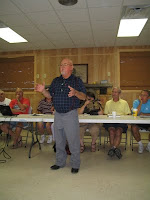 In our church, we take turns cleaning the church for a month at a time. This was my month. I went out this morning and gave it another good cleaning. Next month another family will be in charge.

They are supposed to pour the apron of the drive on Monday...if it doesn't rain. That should help keep the gravel from washing out of our drive and parking lot.

I got up about 5:50 this morning and fed the dog and cat and did all my little chores before leaving for the church.

I don't know what is on the agenda for the day. Tomorrow we are going to dig up some Rose of Sharons that we have started around here and take them out to Leslie. Ours are six years old. I dug them up when they were about a foot tall in Karan's walk. They are seven or eight foot tall now and absolutely covered with flowers. The cool weather has really agreed with my hanging baskets too. They are doing well.

The photo above is Bob Harper, who spoke at the campgrounds celebration last Sunday afternoon.
Posted by Margie's Musings at 11:12 AM No comments:

Because of all the turmoil in this week, we have put off our weekly cleaning until today. I am in the middle of the laundry right now...waiting for the sheets to come out of the dryer. Then the towels go in.

Scott left yesterday morning. He just felt he needed to get on with his life. Then we went out "rock hunting' after lunch. Didn't find a thing but then I didn't expect to in this county. I just humored Bob.

Last night we watched some TV and then went to bed early. My printer is acting up. It continues to say it has only one ink cartridge and it has two. That makes it print everything in red. I have to change that setting every time I use it. Scott has the other one and will bring it back to me next time he comes. In the meantime, I will continue to fool with this one in hopes of getting it to work correctly. I may have to delete it and reinstall it.

Something all the time with computers.
Posted by Margie's Musings at 9:27 AM 2 comments:

Scott came unexpectedly yesterday afternoon. He was a basket case. Taresa has left him again and he simply cannot figure out why. He thought he did everything right. I canceled my hair appointment and my breakfast with Juanita today since I didn't know how long he would stay.

He got up early this morning and had breakfast and then decided to go back and try to get on with his life. He has to fly out to New York on Monday and he needs to try to get his head on straight before then. It's been up and down all weekend. Taresa's dad bailed her out and she moved out of his place.

We went to Independence yesterday noon and took Leslie and him out to lunch. He always enjoys that.

I have him in my prayers.
Posted by Margie's Musings at 8:49 AM 4 comments:

This is the day I go stay with my sister while my brother-in-law goes to breakfast with his friends. She gets more incoherent every time I go...telling me the very same things over and over again. She gets very confused too. That is part of the process, I guess.

The rest of the day until evening, is free. This evening I go to give the invocation at the City Commission meeting. I will probably stay for the rest of the meeting. There is one very cantankerous member who keeps an uproar going all the time. You never know what he is prepared to start each meeting.

I once thought I would like to serve in that way but I don't know if I have the patience for it. The community needs a watchdog though. Perhaps that is his function. They have spent well beyond their means and just keep raising taxes. When we moved into this house six years ago, our taxes were $775 per year. Last year they were nearly $1400. This year they will probably be even more.

This week I will need to pay the taxes on our vehicles. Those have gone down due to their age. Both together vehicles are $215 this year. What I dread to see in December is our property taxes. They are also raising our utilities. Since they lost the entire east side of Coffeyville in 2007 to the big flood, they also lost the income from those homes. They are trying to make up their loss starting this year. We lost nearly 400 homes over there because of the flood.

The refinery had left a valve open while filling a tank to keep it from floating off during the flood. So oil covered all that water over there. Then the Independence, Kansas sewage plant was inundated and their raw sewage floated down the river and covered the entire east side. The refinery bought out several hundred homes and FEMA bought out the rest and they just bulldozed everything. It's a vast green land over there now and the city and the refinery must pay someone to keep it mowed.
Posted by Margie's Musings at 5:49 AM No comments:

Well evidently the experiment is over between Scott and Taresa. She contacted her dad and he provided money so she could move out. Scott is devastated again. I suppose he should have known better but he just had to give it a try. She simply wants to be independent.

Bob and I went to Louie's funeral...graveside...this morning and then had a bowl of chili at Caney Kitchen afterward. We will have sandwiches this evening. There were quite a few people there. We saw a lot of folks we knew from our days in Caney in the 70's.

Sylvia is holding up pretty well. I suppose she will until after everyone leaves. Then she will be all alone.

Scott had thought he would come for the week but changed his mind and thought he may as well get used to being alone again. He took leave this week.
Posted by Margie's Musings at 3:47 PM No comments: 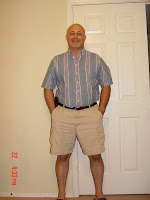 This will be another big day. I will fix my dessert in another hour or two and then we will go to church. After church we will grab a milk shake and head for the campgrounds for that business meeting of the campgrounds association at 2:30. After that we will have the pool party at 4:00.

It isn't over until 7:00 so we will be late getting home. But it will be a good time to see old friends. I just saw everyone at church camp in July but it has been awhile since Bob has been able to go.

Leslie is going to go with us. She will probably drive. She prefers her own driving to anyone else's.

Taresa is back with Scott now. He called last night to give us his new cell phone number. He had it changed so none of his old girlfriends could call him again and cause another huge disruption in their reconciliation attempts. I don't know how serious Taresa is about the reconciliation. Right now until she finds a job, she needs a meal ticket and a place to stay.

I am keeping my fingers crossed.

Keith seems to be doing alright although that may be mainly facade. He is determined not to upset his dad and me with his problems with Kathie. She is another failed marriage. He always seems to find these wounded people. Poor guy. He is such a teddy bear. We all love him dearly. This is a recent photo of Keith.
Posted by Margie's Musings at 6:06 AM No comments: