We got 6 - 8 inches of snow yesterday and even then decided to go to Independence anyhow and take Leslie to lunch. Going up was fine because there wasn't too much snow. But it snowed hard all day and when we went to the cleaners and to Wal Mart to buy some more groceries, the roads were completely covered up. When we started home, my windshield iced up faster then my wipers could clear them and then the ice made the windshield smeared anyhow, so it was touch and go getting home. Bob was a nervous wreck.

We had left Slinky in the garage, next to the hot water tank with his chaise cushion and so he was happy. When we let him back in the utility area, we brought in the chaise cushion too and he loved that. His old bones really suffer lying on a cold floor on a couple of rag rugs on that hard floor. So, last night, he slept through the night without barking to wake me up to let him out to go do his duty.

Scott canceled his plan to come after work. By that time, the roads were treacherous and he decided to play it safe. That was smart.

Bob changed his appointment at the hospital, partly because of the snow and partly because he wanted to talk to the surgeon first..before they measured his arm for that compression sleeve. He got to thinking that perhaps that compression sleeve would press that infection up into his chest area and cause it to affect his heart or lungs so he wants to ask the surgeon about that. So, he sees the surgeon on Tuesday and his appointment with the physical therapy department is now on Wednesday.

His arm is just the same...perhaps even larger. His niece, who used to be a pharmaceutical salesperson, suggested zinc oxide cream to rub on the arm. So he got some and is using it. It can't hurt and it might just help.
Posted by Margie's Musings at 7:27 AM 3 comments:

Well, the snow finally hit last night. And it's snowing cats and dogs right now. We will probably stay in today. Although, we got our homestead exemption refund from the state of Kansas last night and we may try to take our daughter to lunch at noon...if we can get to Independence.

Scott plans to come tonight after work. We have not seen him since Christmas. He calls regularly though, as does Keith. They are both concerned about their dad. In fact, all three kids are.

I got up twice last night to let Slinky out. But I had moved the cushion from the chaise lounge in the house from the patio yesterday evening and put it in the utility area of the kitchen and he has loved sleeping on a cushion. That's where he is right now. He is an old dog and sleeping on the floor has been really rough on him, even with the two little rugs. He wads those up and makes himself a little nest with them.

Silly dog!
Posted by Margie's Musings at 8:37 AM 2 comments:

Maybe today we can get something done about this infection of Bob's. Now I wonder if even an IV can touch it. We'll know later. I expect Melissa to want to put him in the hospital today and start the IV. I hope it works. We're about out of options.

Nothing else is planned for today. If he goes into the hospital, I will need to leave Slinky in the garage while we get him entered and settled in. I know it might be difficult to get him in there after day before yesterday. But I will have to do it. It's supposed to snow today. It was supposed to have snowed yesterday but they changed the forecast to today and tomorrow.

The president gave a good speech last night but his focus was so splintered that I couldn't begin to tell you what he is going to work on next. Yes, he scolded Congress, both sides of the aisle and even the Supreme Court. (they did not look amused) Then he told the military they were going to do away with the don't ask, don't tell rule. They didn't look amused either. Good grief! When are folks going to come into the twenty first century? Our sexuality is just a broad spectrum of orientations. It's not something we choose. We just are what we are. Look at Bonovos and any number of other animals in the animal kingdom. Anyhow, that might be a good thing.

But back to the president...as usual he bit off way too much. I will be interested in watching how the next year goes. I think he may have alienated both sides of the aisle.

The doctor wants him to see the surgeon on Tuesday for a second opinion and the physical theripist on Monday. She will customize a compression sleeve for him and the hospital will order it for him. 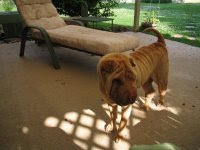 This is Thursday and Bob's arm and hand are worse. The swelling has spread to his armpit and chest now and it is red and warm. This high powered antibiotic does not seem to be working either. The next step is hospitalization and IV antibiotics. I have a call in to his doctor now.

He went to Independence with me this morning and we had breakfast at Eggbert's after my hair appointment. Then we went to the market and then came home and are waiting for her call.

When we got ready to leave, I wanted to put Slinky in the garage where it was warmer. He hates the garage. I took his rugs out there and his water. I tried to get him to go in the garage but when he got to the doorway, he refused. Twice I coaxed him to the utility area but when he saw it was the garage I was trying to get him in, he went back to the kitchen and lay down on the rug by the sink.

Finally, I got his leash. He loves his walk. He came to me and let me put it on him, wagging his tail furiously. When I got him into the garage, I shut the door and took off the leash. He looked at me as though I were a traitor.

When we got home, Bob came into the house and opened the utility room door and he came back into the kitchen. He really needed to go out but was evidently afraid he would not get back in. He stayed in for awhile but when it warmed up to 40 outside on the patio and the sun came out, he wanted to go out there so I took his rugs out to the chaise lounge and he is out there now basking.

He'd better do it while he can. We are forecast for freezing rain and 8 to 12 inches of snow later this afternoon and night. He will be in for another couple of weeks then...no doubt...and so will we.

Update: Bob has a doctor's appointment in the morning at 9:00. We'll see what she says.
Posted by Margie's Musings at 10:39 AM 4 comments:

It's Tuesday now and Bob still shows no signs of improvement on his infection and swelling.

We ended up going to Bartlesville because we had not been there since before Christmas. We browsed around in some of the antique stores. We then call an old friend and asked if he could meet us for lunch. he did and we had a great lunch. Afterward we came back home and Bob took Slinky for a walk.

We will stay home the rest of the day.

I have a hair appointment tomorrow in Independence and then it is supposed to rain and freeze and eight inches of snowfall an top of that. I am hoping it will pass and not land here. I am thoroughly sick of winter and ready for spring.

I did finish my Temple School course today though and got it in the mail.
Posted by Margie's Musings at 8:58 AM 2 comments:

This will be a busy Sunday. We had church as usual and the services went well. Then afterward four of us went to Lanning's for lunch. They had pulled pork and it was very good. Bob and I both had a dinner and we should have split one like Bobby and Karan did. We had a nice visit. We have no Living the Questions group tonight and Bob and I are just wanting to stay home and watch 60 Minutes.

I checked my Spyware Doctor program and found it had not updated itself for 60 days. I trued to update it myself manually but it would not work. So I took it off my computer and downloaded the Spybot S&D program I have on my laptop. It works fine and is free. There was some glitch in the other program that it would not update. Leslie had had the same problem but she got hers fixed. She called Keith and he led her through it.

I got my Sunday letters out today early.

We left Slinky outside today because the sun us shining brightly and he loves the sun. We will let him in later today because it's supposed to get cold again. In the meanwhile, I will run the vacuum and clean up the three kitchen rugs and wipe up the floor there. He makes such a mess coming in and out.

I did get my taxes filed this evening with TaxAct.com. Cost me $17.95

Bob's hand is not showing any improvement yet. It's been since Friday evening since he took his first new antibiotic. We figure we had better see something happening by Tuesday or Wednesday or we will know this antibiotic isn't working either. Time will tell.
Posted by Margie's Musings at 3:25 PM 4 comments: