This has been a windy day. It's supposed to rain tomorrow and then get cold the first part of next week. We have stayed in and mostly read today. After lunch while Bob napped, I did go to the Medicalodge and visited my sister. She seems to be doing well at this point. The physical therapist came in while I was there and had her take a few careful steps to the doorway and back again. They don't want her to put any weight to speak of on her right leg. She will walk gingerly on her left foot with a walker for a couple of weeks. Maybe after the first of the year, she can start walking on both legs and the walker.

We usually eat out on Friday or Saturday night but tonight we will have chili instead. I thawed some ground beef and fixed the chili awhile ago. I need to go get some crackers for mine. I may have some chips to use instead.

Anyhow, I don't know whether there is anything on TV tonight. We may just read.

I read the book my friend, Gay, gave me for Christmas. It is called "90 Minutes in Heaven". It's an interesting book about an interesting near death experience and the man's experience getting back on his feet after a devastating auto accident.
Posted by Margie's Musings at 3:48 PM 3 comments: 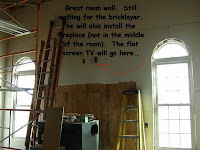 I was looking for a brown sweater. You would think that wouldn't be a large order but l could not find what I was looking for. They were either terribly plain or slim as a reed and good for people who weigh 98 pounds or something like that. Needless to say, I do not weigh 98 pounds. I need a woman's sweater...not a junior sweater.

We went to lunch at Garfield's I love to eat there, even though it's really pretty expensive. Today we had a meal that included refried beans and I have been suffering all afternoon.

We dropped by our daughter's home and looked at the small progress that has been done on their new home. It is truly slow going.

Our son-in-law is going to have a booth at the Arts and Crafts Fair at Cherryvale tomorrow. He did that last weekend at Independence and did have some sales. What they really need to do is put up a web page and sell online. They have a very poor location in the country. And the business is a nitch business. It's lodge type accessories. They have lots of "fish accessories" but, let's face it, not everyone is a fisherman.

We came home after that and Bob took his nap. I read my book (the one called "Blink") and finished it. Bob is reading it too so it will be out for awhile.
Posted by Margie's Musings at 5:29 PM 2 comments:

Well, it was a rough night. About 12:30, I heard Slinky in the kitchen coughing. I got up and found that he had vomited on the utility room rug. I let him out even though it was 10 degrees out there and then cleaned up the vomit.

An hour later, just as I was going to sleep, I heard him barking. I got up again and put him outside to do his duty and then let him back in. This time I laid a chair across the doorway too. Then I went back to bed again. I finally got about an hour's sleep. At 6:00, I just got up. Luckily we don't have a lot to do today. We will go over to Cherryvale to meet my friend Gay and her husband for lunch. Hopefully, Slinky will stay in the kitchen. I will leave the chair across the doorway and hope for the best. It's just too cold outside for him and also too cold in the garage.
Posted by Margie's Musings at 7:08 AM 3 comments:

This has been a busy day. I went to Independence to have my hair done and then picked up Juanita for breakfast. After we finished our breakfast and visit, I took her home and then went to Wal Mart to buy gifts for four children whose parents are out of work and who will need Christmas gifts from our congregation if they are to have a Christmas. One of our congregation has donated a turkey and we have a huge basket of food to take to them too.

I need to get those gifts wrapped before Sunday.

Then I went to Independence Ministerial Association. Bob came up for that. There were 15 in attendance. We have had good attendance the past two years. It used to be six at the most. Then Mercy Hospital started buying our lunch and as I always say, "if you feed them, they will come." I have had several ministers who do not attend ask what we were doing in the community. At our meeting, I proposed that we submit a news story to the Reporter to keep the community advised of our activity. Everyone agreed it was a good idea. So the secretary will send a synopsis of our meeting for a news story to the Independence Reporter.

Later we came home and I sent out letters to my congregation with the new schedule for the next quarter of responsibilities. Then I fixed some soup for dinner.

I just took my bath and guess I will read this evening after the news.
Posted by Margie's Musings at 6:03 PM 2 comments:

Every couple of months, I am asked to write a Minister's Message for the Coffeyville Journal. This morning the secretary of the First Baptist Church called to ask me to do an extra one because the minister of the First Christian Church has passed away over the weekend and he was scheduled for this next Sunday's message. I agreed. I had been wanting to share this message from my new book with my Christian brothers and sisters and this gave me the opportunity.

This is what I sent to the newspaper.

I have been reading a very interesting book lately. It is called "The Great Emergence...How Christianity is Changing and Why" The author is Phyllis Tickle, an internationally renowned expert on religion. She says this event is a monumental phenomenon in our world. This phenomenon has been slipping up on our world for decades. We know our world is changing rapidly in every way and those of us who are Christian and church goers in North America are aware that the Christian church as a movement has also been changing.

The Right Reverend Mark Dyer, an Anglican bishop, recently famously and humorously observed that every 500 years, the church feels compelled to have a "giant rummage sale". We are living near the end of one of those 500 year periods now. This should be psychologically very reassuring for most of us. He says every 500 years the empowered structures of institutionalized Christianity, whatever they may be at the time, become an intolerable carapace that must be shattered in order that renewal and new growth may occur.

History shows us that when that happens, at least three things occur: First: a new more vital form of Christianity does indeed emerge. Second: the organized expression of Christianity which up to then had been the dominant one, is reconstituted into a more pure and less ossified expression of it's former self. Third: The faith spreads dramatically into new geographic and demographic areas.

Five hundred years back from our present place in history, places us in the sixteenth century and into what is now being called, "The Great Reformation", which began around 1517. Another five hundred years back takes us to The Great Schism" in 1054, which divided the Roman Catholic Church and the Eastern Orthodox Church. Another five hundred years back takes us to the sixth century and the Fall of the Roman Empire and the time of Pope Gregory the Great, who saved Christianity from paganism by moving it firmly into monasticism that would protect, preserve and characterize it during the next five centuries. The next backward move five centurys, takes us to the first century where Christianity moved away from Judaism. In 70 CE the Temple would be destroyed and in 130 CE the Holy City would be permanently barred against Jewish blood even entering it. And between those two dates, much of the structure of the Christian Church as we know it was born.

And the most wonderful thing about it all is that when these schisms occur, both parts of the schism change for the better and grow. We have all had the experience at some time or another of changing churches or seen a church divide only to find that both sides of the division then improve and grow.

So, if these two experts are correct, and statistics seem to bear them out, these next few years will be exciting. Yes, Christianity as we have known it will change but that change will revitalize it and cause unprecedented growth.

I hope I am still around to see this happen.
Posted by Margie's Musings at 1:41 PM 4 comments:

We went to church as usual this morning. We had a pretty good crowd for us. The service was lovely, especially with the church decorated for Christmas. Sue had a good message too and Karan,who planned the service, also did a good job. We served communion and Jon, who was baptized last month, received his first communion.

After church, five of us went to the hospital cafeteria and ate lunch and then we went up to visit Phyllis. Tomorrow they will evaluate her and I believe they will send her to Windsor Place for thirty days for more intense therapy. She still is not on her feet.

Then we came home and Bob took his nap and I did my letters to those who did not attend to bring them up to date. Tomorrow Bob has a 9:00 doctor's appointment and we will see what the next step is on getting his sugar down below 132.

Tonight we will watch 60 minutes, one of the few programs we enjoy on TV that is not on PBS. Generally we watch only The American Experience, Frontline, Antique Roadshow, This Old House, Nova, and Bill Moyer's Journal and that's about all. We read a lot. Right now I'm into two books...just finished one of them. It was "The Great Emergence" by Phyllis Tickle. It was a good read and a very interesting proposition. The other one is "Blink" by Malcolm Gladwell. Have you heard of either of them?
Posted by Margie's Musings at 4:56 PM 1 comment: