We had a great time yesterday for the fourth! We went to our daughter's home and had barbecued ribs, potato salad, baked beans, cucumbers and onions; home made ice cream, brownies and my cherry pie cake. It was all just wonderful! We stayed until almost 10:00 watching the fireworks. Scott, our son, swam in their pool. We watched. There turned out to be nine of us.

Our daughter learned they are starting their new home two weeks from Monday. She is so excited! I don't blame her. She is 51 and has waited a long time to have a new home.

Scott is taking us out to dinner this evening at the Chop House. That is good of him. We went to Joplin this afternoon and he bought some decorative accessories for his apartment and a new shirt as well. Eventually he will get his apartment fixed the way he wants it.

He is leaving tomorrow morning to go home. It has been a very good weekend!
Posted by Margie's Musings at 5:08 PM 2 comments:

We went back to the doctor in Bartlesville yesterday morning for the doctor to look at Bob's eye. It is looking good. I have to put three different drops in his eye four times a day for the rest of the month. Actually, one of the drops stops on next Thursday, the second one stops the second week and the third one must be tapered out at four times this week, three times next week, two times the third week and one time the fourth week. It is a steroid and cannot just be stopped. It has to be tapered off to be stopped. Then, he will have the left eye done.

After we left the doctor's office we went to Stage and then to the mall. I was looking for a pair of white cotton pants or white jeans. I only found a pair of linen slacks at the mall in Bartlesville and bought them. They will have to be shortened a little since I am so short legged.

We then went to Sedan to take the ribs for the Independence Day dinner today to Leslie and to take her to lunch, as is our custom once a week.

After that we came home and Bob mowed. I made the potato salad for the Independence Day dinner. Today, I will make my cherry pie cake and later this afternoon I will make the baked beans. Leslie will have corn on the cob and home made ice cream. John has bought fireworks for Sage, their granddaughter to see. There will be John and Leslie, Bob and me, Scott, our son, Jeromy and Sage, our grandson and his daughter, and Cyndi, Leslie's best friend. Jeff, Cyndi's fiance' is gone and will not be there after all. His father died on Tuesday and he has gone to Iowa for the funeral. We'll still have quite a crowd.

I fixed a braided ham and broccoli casserole for dinner last night and we had it with a toss salad. Later that evening Scott came in from Fort Leonard Wood for the weekend. he was tired after his three and a half hour drive so went to bed fairly early. Bob and I were also tired so we soon followed. Today will be a fairly big day too. I will cook breakfast after a while and then my day is cut out for me as outlined above.
Posted by Margie's Musings at 4:37 AM No comments:

Today was the day for Bob's first cataract surgery. We got up at 5:45 and left for Bartlesville where Bob's doctor practices. We arrived there at 7:00, thirty minutes early. That didn't help though. Even though his appointment was at 7:30, they didn't take him in for preparation until 8:00. He was out by ten and we went to breakfast since neither of us had eaten since dinner the evening before.

The surgery went fine without any complications, so far, at least.

We stopped by Stage and he bought a new polo shirt and jean shorts for the 4th of July at John and Leslie's house.

We go back to Bartlesville tomorrow for the doctor to take a look at the eye.

They will do the left eye in one month.
Posted by Margie's Musings at 12:40 PM No comments:

Does the busyness ever end? Today was a third busy day. I got up this morning at 6:00 and fixed Bob's breakfast and ate a bowl of cereal myself. Then I went to Independence to my hair appointment at 7:30 and after that to my board training for the Montgomery County Health Clinic from 8:30 until 12:30.

Following that meeting and lunch, I shopped for my daughter's birthday gift and picked up some altered slacks and then went to her home to leave her gift. Today she is 51.

When I got home, Bob had given Slinky another bath. I got a huge bang out of him. I brought out some cinnamon toast and he knew without even being told that to get any of it, he had to "sit". He "sat" for every bite.

Tomorrow is Bob's eye surgery. We have to be in Bartlesville, 40 miles away, at 7:30. His surgery will be within two hours of his check in at surgery. It will be good for him to be able to see clearly again. In one month, he will have the other eye done.

Thursday, I will make potato salad for Friday's family picnic. Our son, Scott, will be here on Thursday afternoon and we will probably cook supper that night. I have to take the ribs out to our daughter's so her husband, John, can barbecue them on his grill Friday evening. Friday afternoon I will make baked beans for that meal. Leslie will make corn on the cob and homemade ice cream. They will then shoot off their fireworks. Their granddaughter, Sage, will be there too.
Posted by Margie's Musings at 4:23 PM 3 comments: 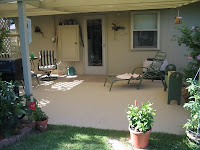 This has been another busy day. It began with me cleaning the kitchen, dining room and hall after I watered the animals and all the plants. Then Bob and I (mostly Bob) painted our patio floor and I cleaned all the patio furniture and after the floor had dried, we put the furniture back on the patio. Bob repainted a table out there too.

We are both very tired. We don't have the energy we used to have that's for sure.

But the patio looks 100% better I'll take a picture of it and post it here. 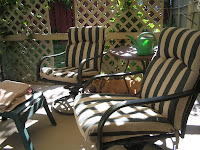 Here is how the furniture looks now that it's all clean and painted.
I will try to find time Thursday morning to paint the swing. It is peeling badly. After that is finished the back yard as well as the front should look very nice.

After we finished we went and bought a Sonic milk shake. Bob went to Ace Hardware and Sherwin Williams paint store looking for the paint we used on the tables on the patio but couldn't find any to match. He just painted them the same color as the newly painted floors.
Posted by Margie's Musings at 5:21 PM 2 comments:

Sundays are always busy and yesterday was busier than usual. I did my usual watering and feeding of both animals and plants and then we went to church. Afterward we ate a salad at an Independence restaurant and then took a Weed Eater trimmer back to Wal Mart to return it. We didn't have the receipt so they gave us a gift card for the return.

We then came home and I began my notes to those who did not attend church yesterday. Part way through that job, my printer stopped working. In order to get it working again I eventually deleted it and reinstalled it and then had to recall how I got the laptop to print wirelessly. After several hours, I got everything working again just in time to make my salad for the dinner at Keith and Joyce's home.

We had a grand time. Jack brought fish and Keith cooked it out on the patio. It was Keith's birthday and Joyce had baked him a cake and bought ice cream for dessert. After the party, we had our "Living the Questions" group meeting. We got home at 10:00, bathed and went to bed.

It was a big day for both of us. While I worked on getting the printer going, Bob mowed the yard.
Posted by Margie's Musings at 5:12 AM No comments: