A Cold to Fight

Well, Bob brought home a cold for me to catch. I have a real "thing" about colds though. I am determined not to have them. I start with the zinc lozenges immediately and keep them up all the while I am awake...every three hours. Yesterday was miserable and the day before even more miserable but today I am no longer blowing and am feeling much better. The last three colds I started have done this way.... two days...max.

I am a real believer in zinc lozenges. They work for me. They may be the placebo effect but whatever...they work.
Posted by Margie's Musings at 10:32 AM No comments:

You know, it is really a shame what Reverend Wright has done to Barack Obama. Obama stood by this minister and trusted him until he just couldn't any more and Reverend Wright really betrayed that trust. It may cost Obama the election in the end. It has benefited Hillary and really benefited McCain. Obama was wise to finally cast him off since he had really betrayed a friendship. When he said Obama actually agreed with his point of view but couldn't say so because of politics, that was the last straw.

Yet, we know Obama combated that by being very low key in his response.

But how could a minister do such a thing to a friend? The man baptized him and his children and was his pastor for years. All this to promote his upcoming November book. I wonder if he will think it was worth it in the end.
Posted by Margie's Musings at 3:17 PM 2 comments:

I was at the local supermarket this morning, waiting in line to check out my groceries and the woman in front of me reached back and picked up one of those supermarket tabloids, "The Globe". You undoubtedly have seen this rag. The headline screamed "Hillary Sex Scandal!" and it talked about Hillary being gay and having a gay girlfriend. I said nothing to the woman about her choice of news source.

She, however, (a perfect stranger) asked me who I was going to vote for and I answered, "Hillary". She was appalled. She said, "How can a Christian vote for Hillary. She doesn't know how to tell the truth and neither does that husband of hers." I said nothing. Finally, she said, "If you're a Christian, how can you vote for Hillary?" I said, "Hillary is a Christian too, you know." She shook her head and walked away.

Later, I wished I had said something to her about her choice of a news source but I figured anyone that ignorant wouldn't have listened to me anyhow.

You can almost understand why our founding fathers wanted only the educated to vote.
Posted by Margie's Musings at 12:19 PM 2 comments:

President Jimmy Carter has taken a lot of flack over his trip to talk to Hamas to try to make peace between the Palestinians and Israel. It's a no brainer that the only way peace will ever come to the middle east (or anywhere else) is if both sides talk and someone has got to monitor those talks. President Carter seems the perfect man to do that. His organization monitors elections all over the world to make sure they are fair. The man has done a lot to bring peace around the world.

The war mongers in this administration, however, do not want peace. The rich are making a killing off this war and they are not interested in peace. Therefore they resent his attempts at peacemaking.

Nothing really changes, does it? Thousands of years ago, the Psalmist wrote this:

Why do the nations conspire,
and the peoples plot in vain?
The kings of the earth set themselves,
and the rulers take counsel together,
against the Lord and his anointed, saying,
Let us burst their bonds asunder,
and cast their cords from us."

Nations still make war for profit and they expect the nation's most vulnerable to fight those wars. Seldom do you see the children of the rich and powerful in those dangerous places.

I am on the side of those most vulnerable. Sometimes they are vulnerable because they feel they have no other options. Some cannot find jobs and the jobs they are able to find with their high school educations or less, are either minimum wage jobs or at most $9.00 an hour. Who, in this day and age, can live on $9.00 an hour? The answer, of course, is no one. That why these vulnerable folks join up. They know they will be taken care of...if we're talking about food, shelter, and medical attention that is. At the first sign of war or conflict of any kind, they are sent into the fray.

No, President Carter has the right idea. Peace is only won through talking out the problems and sometimes compromise. That's the way it is with families, neighbors and communities. And that's the way it is with countries too. We have to learn to respect the cultural differences of our world and understand that not everyone sees things our way. That's the only way we can ever make this world a community. 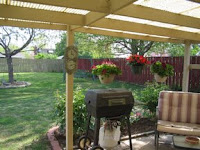 It's been another very busy week. Monday, as usual, I cleaned house. Then Tuesday was the board training and meeting for the Montgomery County Community Health Clinic. That took much of the day. Wednesday I had an appointment in Independence so that entailed a second trip there this week. Then I drove to Sedan and took my daughter, Leslie, to lunch.

Thursday, I went to Bartlesville and shopped but couldn't find anything I really wanted. It did give me the opportunity to have lunch with friends though and I really enjoyed that. I had some books I wanted to give them and had them in my trunk so I was happy to get them delivered.

Friday, I went to Joplin on a shopping trip. All my friends were gone so I went by myself. I bought a new spring outfit there. Saturday, I cleaned the church and went to the nursery and bought the rest of my flowers to get my patio pots planted and the rest of the flower beds finished.

All I lack now are the hanging plants in the front yard and my petunia plantings along the border. I'll do that this week.

The house is looking a lot like spring. The peonies here
are ready to pop open. The clematis on the trellis is also budding up. 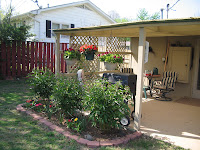 Bob will be home this Tuesday and I am really ready for him to come home. Being alone is only fun for awhile and then it just gets old. Tomorrow is our 54th wedding anniversary. We'll celebrate that when he gets home.

Tonight I have the "Living the Questions" group and will need to fix a dessert for that. I'll think about that after church this morning.
Posted by Margie's Musings at 7:53 AM No comments: