A Monday to Repent 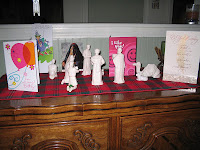 Yesterday I complained that my family had about forgotten my birthday and then I was prompted to remember that my eldest son had called day before yesterday to say my card was in the mail. He had enough on his mind with tests to see if he had a heart problem. My birthday was the least of his troubles. I apologize for my weakness.

My daughter had sent me a lovely Christmas Cactus. It sets in my window now all covered with buds.

When I got to church, one of my dearest friends left a lovely card in Bob's car for me. He had already sent me a kindle book but the gift bag also had a DVD included in it. Then after church a group of us went to Independence to the Railroad Inn for dinner. Bob treated me to the dinner. He too had brought me a lovely card.

Then my grandson called and talked to me for the better part of an hour. I had not heard from him since Bob died two and a half years ago except when he got married and I was invited to the wedding. Of course, I was unable to attend since it was in California but I sent a gift and card. Then late that afternoon my granddaughter in Georgia texted me a Happy Birthday. She was at work but took the time to do that anyhow.

Last evening Bob and I went to Living the Questions group at Jack and Marilyn's home. There Marilyn had baked me a cake with a candle symbolizing my 77 years and two of the group gave me cards. Now my server is covered with cards.

I am an ungrateful wretch! I had a great birthday! 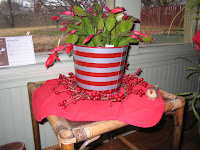 Posted by Margie's Musings at 7:10 AM

You aren't an ungrateful wretch. Every once in a while something comes over us and makes us feel somehow unappreciated. A mood we are in can start those feelings. Birthdays are very sentimental times for us...I've found myself with much the same feelings from time to time... only to find out later that I was sorely mistaken.We all are guilty of this. Just let it go and enjoy your day today.

Thanks Clairz. I appreciate that!