Today I will take the cakes to Independence to the First Christian Church.  Then I will browse around in Goody's until time to come home and go to lunch with the LTQ women.  Bob will be on his own for lunch today.

Scott, my youngest son, called this morning and chatted with me. It had been awhile since he had called. My kids are really good at staying in touch.

More later....Karan is here with her cake.

Tomorrow we will pick up Karan about 6:50 and go to Independence where we will board a bus for  Overland Park to a dinner theater. We used to do this a few years ago but the Condon Bank sponsored these trips and they sold to another bank and they discontinued the trips. Now a woman has decided to resume doing them. The 50 passenger bus is sold out.

Sunday, as I have said, we will, as a congregation, take a trip to Independence, Missouri to our World Headquarters for a special worship service out congregation is in charge of. My daughter is presiding and some of us have a part in the service.

This is a photo of our church's Auditorium where all our World Conferences are held and in the background...the building with a spiral,  is our Temple for Peace. This is a poor photo. I have a much better one on my laptop computer. I took this one off our church's website.  The trees obscure the buildings. 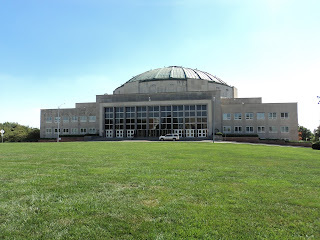 This is the Auditorium I  mentioned. It covers a city block.

Here is a photo of the Temple although not a very good one. I have seen better ones. This is the back view. I will take some better ones on Sunday.

I did meet the girls for lunch. Mona was 35 minutes late and Joyce never showed up. The Dish people were there to change her TV and internet from the  Cox company to Dish.

I would rather have gone with Leslie to Bartlesville.

This is the group of us that went to lunch at Eggberts. 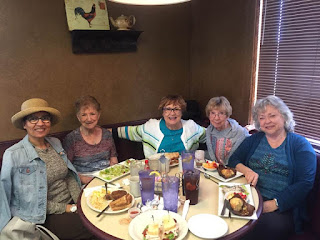 That's a pitiful photo of me. That's Mona on the left with the hat, me next to her, Karan in the light jacket, Marilyn on her left and Judy on the right.

I got some rest in the afternoon. Bob came to read the paper. After he left, I took my bath and Missy and I watched some TV until 9:00 or so. Then we went to bed. Tomorrow, Karan, Bob and I will go to Independence to catch the bus that will take us to the dinner theater in Overland Park. It will be a a huge day. Bob will pick us up about 6:45.

Posted by Margie's Musings at 6:38 AM