Sunday and Church...and a Fox

I got up after 5:00 and got myself ready for church and fed Missy and ate my own breakfast. When I went out to got the papers, I took Russell's over and put it on their mailbox...as usual...and then I noticed a large fox on the road outside my apartment. I quietly went back in to get my camera and just then Twitch, my neighbor's dog saw the fox and barked. It ran quickly back to Merrill's house and into the brush back of his house. I was so disappointed. I just about had a photo of that fox. Wayne, my former landlord, told me there were three kits in that brush back there as well as the mother.  Darn! I almost had that photo! Here is one I found online.

I will go to church this morning. Bob is driving this week. I teach the adult class. It is mostly a discussion of a book the class is reading called. "Saving Jesus...from the Church". It is quite good and we have a lively discussion about the topic. It gives no answers...just presents information and asks questions.  It makes us actually think!

After church, we will go over to Cherryvale to "Just Us" for lunch. Afterward, I will do my congregational newsletters. Those go out to the entire congregation and are actually meant for those who do not attend that Sunday so they don't miss out on the announcements but everyone gets it. Those without e-mail get it in snail mail.

Karan had an excellent sermon at church today. I took some photos of her worship setting. It was full of candles.  She also had a small fountain going but I didn't get the photo of it. She had the communion emblems setting there on the right where there is just space now. It was lovely. 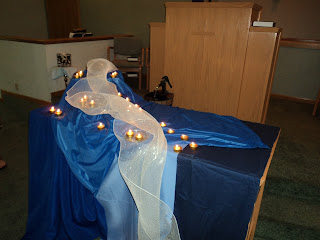 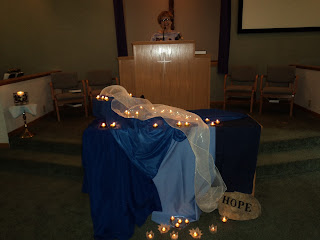 The second photos shows the peace candle too at the left and Karan is in the pulpit .

I am presiding next week and have been working on the bulletin and it is now finished.  I have also downloaded Mahjong on both computers...something else to waste time on.

I had better take Missy outside. She has been cooped up in the apartment all day. More later...

I did take Missy out for awhile and then we laid down on the sofa and rested. I watched 60 Minutes until it was time to leave to pick up Gary for Living the Questions group meeting at Karan's. It was a lively discussion but the majority of us decided the new DVD was just too "historical"....not enough theology.

I got home after 9:00 and took my bath and watched TV until 10:30...an unheard of development for me.  I had a hard time getting the TV to turn off or even to change channels. The remote may be low on power. Lord only knows I use it enough. It may need batteries. When I finally got it turned off, Missy and I went on to bed.

Posted by Margie's Musings at 7:17 AM