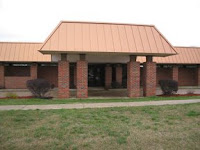 I am going to the Home Show today to man a booth for the Montgomery County Medical Clinic. This is an organization that has brought low cost health care to Montgomery County in the form of a health clinic for the uninsured or under insured. We need more visibility so I will have a table and hand out brochures at this Home Show where, hopefully, several hundred people..perhaps even thousands of people will pass through. We have purchased a table top presentation system so we can show off our pictures and brochures. We are in the process of applying for Federal assistance for this clinic.

Right now we are operating under a grant from the State of Kansas. The clinic is only open on Thursdays from 3:00 until 9:00 and we have several doctors who volunteer their time to keep it going. Our director is a PhD nurse who volunteers her time there too. I have to admire this woman. She donates hundreds of hours to get this clinic off the ground. As a board member I feel I must do anything I possible can to support her and the program since it is so badly needed. Southeast Kansas is very poverty stricken. Many, many people have no insurance at all and fall between the cracks as far as health care is concerned. I have talked to people who never go to the doctor when they are sick because they simply cannot pay the bill.

What a tragedy in the richest country in the world.
Posted by Margie's Musings at 6:54 AM No comments:

I watched the debates on ABC last night between Obama and Clinton and I think both candidates did well.

Their apparent good will toward one another was gone this time though. I think Hillary won this one hands down although I think she may have given McCain's campaign even more ammunition for the actual campaign after the primary.

I understand why she did what she did though. She must feel she must use anything legitimate to win the nomination. After all, neither of them can get enough delegate votes to win without the super delegates making the final decision.

More then the candidates responses, though, I was struck by the superficiality of the questions. What on earth were George and Charlie thinking of?
Posted by Margie's Musings at 6:50 AM No comments: 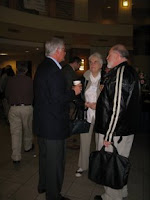 I just came back this afternoon from the first annual Restoration Scriptures Symposium in Independence, Missouri. It was a great weekend. I took Madaleen with me and Joyce and Ron, other friends of mine, were there as well. In fact, Ron and I presented a paper on a connection we discovered between Dartmouth College and the development of the Book of Mormon.

There was a huge crowd there for JWHA. We usually have about 130 and the best attended meeting at Nauvoo (for the 30th anniversary of the organization) had about 170 registrations. We considered that great. There were around 150 at this meeting this weekend.

The picture at the left is Church Historian Mark Scherer visiting with Joyce and Ron Dawbarn.

The weekend began with a pre-conference screening a a new documentary film called "A Mormon President". It was begun before Mitt Romney dropped out of the race and there was a half million dollars spent on it and now they're not sure what to do with it. They asked us to critique it.

The first speaker was President Emeritus Wallace B. Smith who gave his personal reflections on his tenure as president of the church. It was very interesting.

Then there was an opening reception with fruit and cookies and coffee and lemonade. That gave us an opportunity to get re acquainted with one another. That was Friday afternoon.

Saturday morning began with a Plenary Panel with Mark Scherer, Dale Luffman, and John Glaser on the subject of "The Future Status and Use of the Book of Mormon in Community of Christ". They answered a lot of questions from the audience. 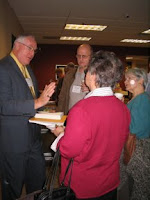 Next, I attended a Concurrent Session with two speakers. they were Graham Stott on "The Rhetorics of Space, Place, and Time" . His topic was looking at the Book of Mormon to explore how we can conceive and talk of sacred space when the location of the religious experience is unknown. He was speaking about the land Bountiful in the Book of Mormon.

The second speaker was Andrew Bolton who is an apostle in the Community of Christ.

His topic was "Utopian Vision and Prophetic Imagination: Reading the Book of Mormon in a 19th Century Context".

At right is Apostle Dale Luffman who also presented a paper.

Then we had a lunch of pizza and salad.

After lunch we had another Plenary Panel composed of Newell Bringhurst, Craig Foster and William (Bill) Russell. They discussed "The Mormon Quest for the Presidency". There have been all in all 10 different Mormons who have run for president of the United States over the years, including the latest, Mitt Romney.

Then I went to another Concurrent Session. This time at 2:00 it was William Russell on the subject of "Courage: A Liberal Journal Foreshadows RLDS Doctrinal Shifts". he discussed the history of Courage and examined the journal's place in the theological shifts that transformed the RLDS church in the 1970's, 1980's and 1990's. The second presenter was Dale Luffman, one of our apostles, on the subject of the initiatives of leaders who encouraged the church toward more intentional involvement in ecumenical endeavor. He discussed the resistance these initiatives have faced and examined future results and prospects.

Ron and I presented our paper next. It was entitled "The Book of Mormon's Origin: The Hill Cumorah or Dartmouth College". Our presentation gave a summary of our findings and specifically examined connections people involved in the Book of Mormon production had with Dartmouth College. It was well received with only one negative comment. That was a man who said he could read the paper with the characters that Martin Harris took to Professor Anthon to be translated. He then proceeded to "read" it. Following the meeting, when Ron asked him how he managed to learn that, he answered that he did it by the "power of God".


The last address was by Jan Shipps. It was entitled "Critical Episodes in the History of the Prairie Saints since World War II". Along with this she also presented the story of her journey to become a historian of Mormonism.

Most of the papers were very good and thought provoking.

At the last day, we were given a tour of the archives and we saw some great historical artifacts.
Posted by Margie's Musings at 8:08 PM 1 comment: