It was 34 degrees when I checked this morning. It's 38 now. Talk about temperature fluctuations! It's supposed to get up to 55 today and 60 tomorrow before it drops back into the 20's on Monday.  It's a wonder we're not all sick. What must our bodies think. How can they prepare us for health?  Oh well, the weather is one thing we can't change. We just have to live with it.

I do wonder what the weather will be like for my trip to Independence, Missouri on Friday.   Bob will feed and water Missy while I'm gone. (And clean out her litter each day) She is lying here in the wicker chair this morning watching me type.

I slept from 9:00 PM until 2:00 AM this morning and then finally got up about  3:30 AM and drank a glass of milk. Milk has a natural chemical in it that helps you sleep. I warmed mine a bit. Within ten minutes I was back to sleep until 5:30.  It works for me every time.

I stripped my bed this morning. I have been putting that off for a week.  It is all in the dryer now. When I get back from breakfast it will all be dry and I will make my bed again.

I will do some cleaning today. I need to give the kitchen and bathroom a good cleaning.  I willl wash the floors in both rooms and run the vacuum cleaner on all the carpet. I always feel better when the house is clean.

We will have leftover chicken tetrazzini for lunch and some veggies and salad.  We will finish off the cupcakes for dessert.  I need to go to the market today and get some stuff for a relish tray for the Living the Questions group at Marilyn's tomorrow night. She is serving Italian and we are to bring "anything".

It warmed up into the 50's this afternoon and I let Missy out while I was sweeping the patio off. She loved that! She jumped into the leaves and was really enjoying the sunshine. 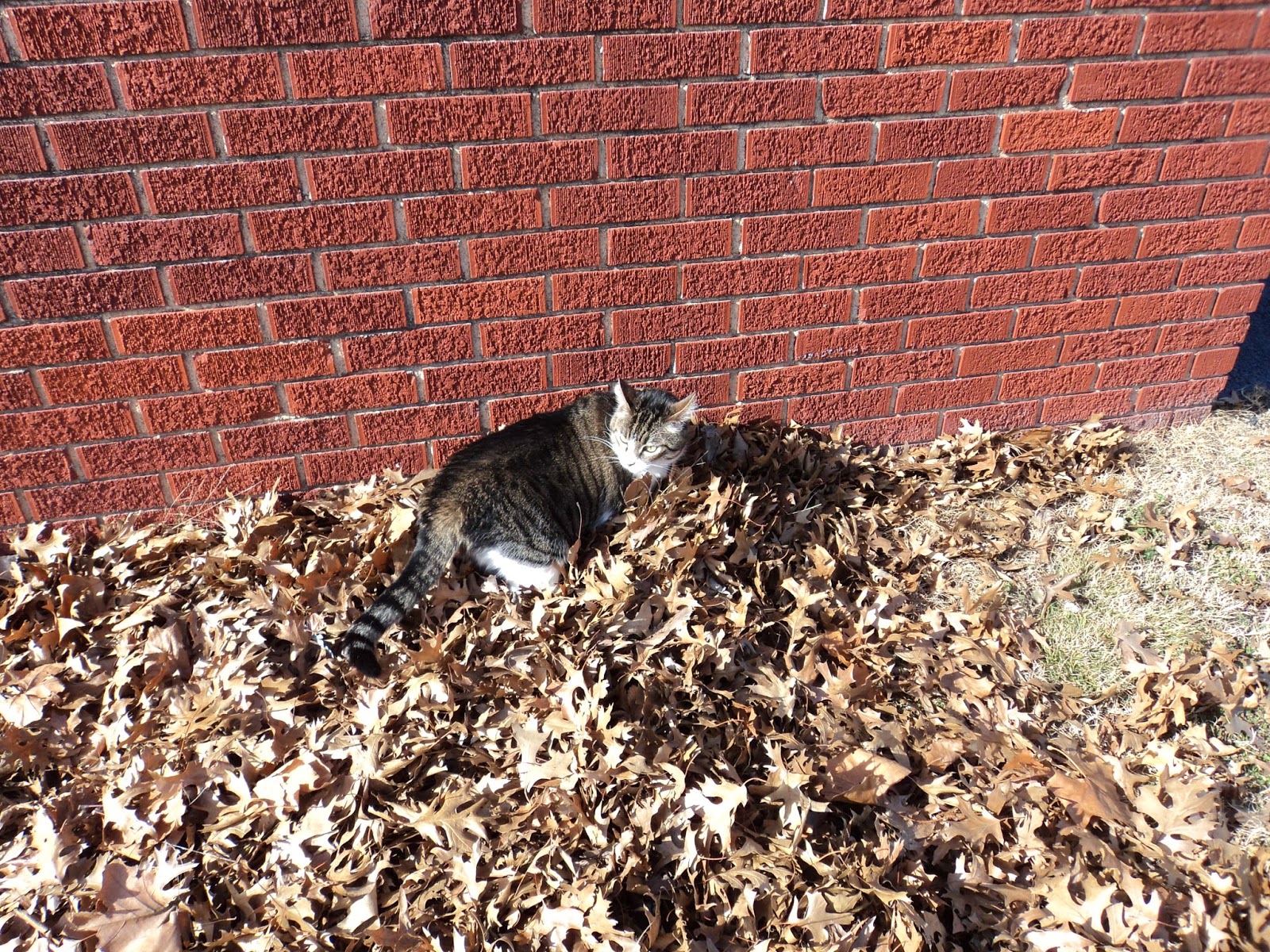 It was 5 degrees this morning. I went to Independence and had my hair done. I then stopped at the church and put some letters on the church's sign for the sign repair work. The man who is doing the repair needed to know the correct letter size. Then I came on home and Bob and I went to exercise class.

Then we got back home about 3:30. I lay down in the recliner with Missy in my lap and slept for at least an hour.  I must have been exhausted. The wind simply wears me out.  When  I got up and went out to get the paper, I found leaves all over the carport...real deep. I got my trash bag and scooped them up into it.  I knew if I swept them off the carport, they would just blow back on the doorway.

Bob came over this  evening and we watched PBS. Then since there was nothing else of any interest on, he went home to read the paper and I took my bath and put my pjs on. I have watched a couple of "In the First 48 hours programs and in an hour or so, I will go to bed.

Bob and I will have breakfast in the morning at Eggberts..


Posted by Margie's Musings at 8:20 PM No comments:

It's 10 degrees this morning. Brrr. I slept well last night. I am concerned about the weather for my trip next week. It's about a three hour drive....north. I hope Kansas City is not any colder then southeast Kansas. My car should be fine. It's got just a little over 50,000 on it now.  But if there's snow or ice, I will not go.

I tried to stay up later last night again but played out about 9:00 and went to bed. Nevertheless, I slept fine and until nearly 5:00 AM.

I am baking the frozen lasagna for lunch today. I thawed it out last night and will add more meat and sauce to it. I hope it works out o.k.

When Bob came home from his Lion's meeting, he came over briefly to touch base. He will be back for lunch.

Our lunch turned out well. I enjoyed it. I don;t think Bob was particularly hungry. he had had a large breakfast with the Lions Club.

My three year old Amazon Kindle finally died and I sent it back today. I got a reworked Kindle Paperwhite at a reduced price. My warranty  was up a year ago. I received it today and spent most of the afternoon trying to figure it out.  Finally I contacted Amazon and they sent me a link to their owners manual. Unfortunately, my laptop could not download it. So I went in to my desktop computer and it downloaded it and saved it on my desktop. Little by little I will figure it out. I will need to buy a cover. That protects the  finish. I can get a used one for somewhere around twenty to thirty dollars.   But first I will need to pay for this reworked Kindle.

We didn't have exercise class on Monday because of Martin Luther King Day but we are back to it today. Then I will fix chicken tetrazzini for lunch. We will have a veggie and Bob will bring a salad.  I have lemon cupcakes for dessert.

He brought popcorn for our TV viewing last night and we had our usual small glass of wine.  We drink a red wine called Roscato. It's an Italian wine. We discovered it at Branson and have been buying it ever since. We take turns. It's only a little over $11.00 with the tax but we both like it. And red wine is better for you too.

We watched several episodes of The Big Bang Theory and then he left at 8:00. I changed to PBS and watched a special on the author of The Catcher in the Rye, J.D. Salinger.   It was interesting. The author was a very troubled man. He had seen some horrendous things as the war ended and he helped to liberate the concentration camps. He really never recovered.

I don't know what's on the agenda today. I went to Wal Mart here yesterday and bought the few groceries I needed. The most important thing was litter for Missy and cat food. Everything else was incidentals. :) Even at that, I managed to spend over $30.00. It's amazing.

I stayed home most of the day after the exercise class and our trip to Utopia for coffee.It was very cold.  I made our chicken tetrazzini  and fixed some veggies and we had a good dinner/lunch. I sent some of it home with Bob. I am thawing the lasagna from a couple of weeks ago. I will fix some additional meat sauce for it after it is thawed.  It was a little thin when I fixed it before.  Bob will bring another salad. We will have some more of the cupcakes for dessert.

It will be even colder tomorrow. It's supposed to be 7 degrees tomorrow.  I intend to stay in. My electric bill will be  very high this month. We have had some very cold weather. This has been a very strange winter for Kansas.

Posted by Margie's Musings at 6:00 AM No comments:

I have five cakes to take to Independence today. There will be two or three from Independence and two from Neodesha.

Afterward we will go to Carol's to get our hair cut. Afterward we will eat at Big Cheese.  My hair grows very fast. I only hope the hair shaft gets thicker now that I'm taking Biotin for it.  Ever since it got grey, it got wispier. It looks very thin that way.

We have eaten out several times lately. After Bob got out of the hospital Tuesday, we ate out. Wednesday we ate out too. Thursday I fixed spaghetti. Then Friday we ate out and Saturday morning we had breakfast out before we went to the Martin Luther King celebration and afterward ate soup. Then Sunday we went to Cherryvale to Just Us and yesterday after Bob's doctor's appointment with his heart doctor we went back to Eggberts for chicken fried steak. I will cook tomorrow.

By the way, his heart doctor seemed pleased with his progress. He only questioned why he was taking a blood thinner. He will consult with his GP and they will decide if he really needs a blood thinner (especially since he has a hole in his Aorta valve and that leaks blood.)  I hope he reads Bob's records carefully.

I'm not sure what's on the agenda this afternoon.

Bob came over for awhile and we watched reruns of The Big Bang Theory for a couple of hours. We drank a small glass of wine and had the cheese and summer sausage he gave me for Christmas.  He went home at 8:00 and I took my bath and watched Antiques Roadshow for awhile. I got to bed shortly before 10:00 and slept well. My arms were not a problem last night. .
Posted by Margie's Musings at 6:44 AM 2 comments:

Monday And No Exercises Again

As you know, if you follow my blog, I never did find the time to blog yesterday (Sunday).  Saturday was very busy but yesterday was just as busy.  We had church, of course, but before the 11:00 worship service we had a congregational budget business meeting. And once again, I am secretary.  So besides doing my weekly congregational newsletter, I also had the minutes to do and get approved by Leslie.  I finished around 4:00 and began to watch the news after that.

Following church, eight of us went to Cherryvale to eat at Just Us.  The other four went to Hong Kong for Chinese.  The eight of us do not go to Hong Kong anymore. If you have more then six in your party, they charge 18% extra on each ticket. There were 10 of us that went the last time we went and they made an extra $18.00 off our party. That stopped us from going. If we want Chinese, we go to Independence to Great China. It's much better Chinese food anyhow.

About 5:00 or so, Bob came over and stayed until 9:00.  We watched the news and several episodes of The Big Bang Theory. Then we both got very tired and he went home. I stayed up until 10:00. I sleep better if I can make it until 10:00.  As it was I awoke at 3:30 with my arms hurting so I got up and took a couple of Aleve with milk. Then I got back to sleep.

Today we will not go to exercise class because of Martin Luther King Day. The senior center is closed too. At 11:30, Bob has an appointment with  his doctor.  Instead of cooking, since we have no idea how long that appointment will take, we will eat a chicken fried steak at Eggberts.  He has been keeping track of his blood pressure and pulse rate since he got out of the hospital last Tuesday. If his medicine doesn't regulate his heart rate, he will have to have a pacemaker.  His doctor says that is a last resort.

This afternoon, I have to bake two cakes for the First Christian Church in Independence. I will take the six we bake here in Coffeyville up when I go up in the morning for my hair appointment.


Posted by Margie's Musings at 6:34 AM No comments: