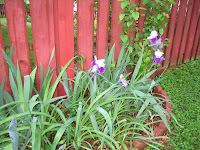 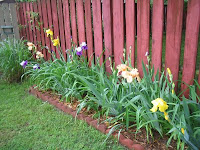 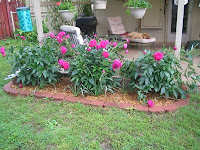 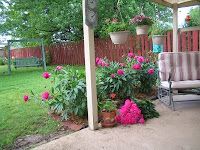 We had a heck of a storm this morning with 65 mile per hour winds and hard rain.

When I got up after six o'clock both animals were sitting by the back door scared and waiting to get into the kitchen. I let them both in and then when the storm abated, I went out to survey the damage to my flowers. It's a good thing we sat out on the patio yesterday and enjoyed them because that wind broke off a lot of those peonies and luckily, did not damage the iris.

As you can see, I cut off the broken ones and they look better now but I hate that so many of those peonies had multiple buds on the stems that were broken.

My sister gave me the iris a couple of years ago and they have done beautifully out there where they get full sun. I wish I had the energy to dig that bed clear to the fence on the north but I don't.

I saw my first hummingbird day before yesterday so I got out the hummingbird feeders and got them filled. Strangely, I haven't seen any ruby throated ones yet. Just two plain brown ones with beige breasts.
Posted by Margie's Musings at 9:07 AM 4 comments:

There a lot of waste in the government's farm subsidies. This is a program designed to help family farmers during the depression by subsidizing some of their crops. It has long gone far beyond that. Now 90% of the money for those subsidies goes to corporate farmers. Very little gets to the family farmer. In fact, family farmers are nearly extinct in today's economy.

* Farm subsidies are intended to alleviate farmer poverty, but the majority of subsidies go to com­mercial farms with average incomes of $200,000 and net worth of nearly $2 million.

* Farm subsidies are intended to help struggling family farmers. Instead, they harm them by exclud­ing them from most subsidies, financing the con­solidation of family farms, and raising land values to levels that prevent young people from entering farming.

* Farm subsidies are intended to be consumer-friendly and taxpayer-friendly. Instead, they cost Americans billions each year in higher taxes and higher food costs.


I think this is one program we should eliminate from the budget.
Posted by Margie's Musings at 2:23 PM No comments:

I had a busy morning. I had my hair done early, then went to breakfast with Juanita. Later I paid my taxes...grrrr. Then went to the market and bought a few groceries.

After that I bought a birthday gift and card for an old friend and took it by the house.

Then I came on home and finished my Grisham book. I did not like the way it ended.

This afternoon I visited with my granddaughter on the telephone for quite awhile. It was good to hear from her.

I need to get her birthday card in the mail. Her birthday is Sunday and she will be 19. She is in Savannah looking for a job now. She has applied for a dozen but it appears no one is hiring.

I will post her photo.
Posted by Margie's Musings at 2:58 PM 4 comments:

In April then Kansas Gov. Kathleen Sebelius vetoed the state legislature’s fourth attempt to clear the way for Sunflower Electric to build two huge coal-fired power plants in the western part of the state.

Sunflower Electric's plan hinges on selling the coal plants' power to out-of-state utilities. The largest of those utilities is Colorado-based Tri-State Generation and Transmission.

Now the new governor, Mark Parkinson, has made an agreement with Sunflower. They have agreed on one coal fired power plant and a wind farm. 85% of the power from this plant will go to Colorado but all of the pollution it produces will come to Kansas. What is our advantage for building this plant?

Under Sunflower’s plan, Kansas would end up with all the pollution and future CO2 liability from the coal fired plant, but very little of the power.

I urge my Kansas readers to contact their senators and state representatives and urge them to vote against this legislation. Such a plant...even one of them is only to the detriment of Kansas. Governor Sebelius was smart enough to know that and veto the entire plan. Some people up in Topeka have a reason for wanting this plant but it certainly is not to benefit Kansas.
Posted by Margie's Musings at 12:03 PM No comments: 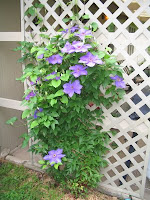 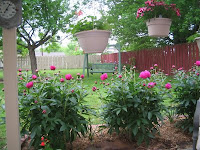 Today I will go to my sister's home again and sit with her while my brother-in-law goes to breakfast. Every Tuesday my sister tells me the same things..over and over again. Her Alzheimers Disease is progressing. I wish they would find a cure.

It didn't rain yesterday but the ground was too soggy to mow and our grass is six inches high. It's supposed to rain today. It will have to be bailed before I get it mowed.

Bob felt really bad all day yesterday. I'm not sure if it's diabetes or his shingles. The shingles are gone but he still has pain with them. He took his last pain pill last night. We may have to see about getting them refilled.

My peonies are opening now. I hope today's rain doesn't ruin them. They are always so beautiful. These pictures are of both the clematis and the peonies. They are both in bloom now.

Bob is mowing before the rain begins again. I am really sick of rain.
Posted by Margie's Musings at 6:22 AM 3 comments:

Today I cleaned house. Because of the rain, the dog, Slinky, had been in quite a few days and the floor of the kitchen was badly in need of washing. It was sunshiny today and so he spent the day outside. He slept outside last night too and I got a good night's sleep...primarily because Missy slept outside too. She has a bad habit of waking me about 2:00 and wanting to go out.

I worked most of the day on a paper for my next presentation. It is on " The Historical Jesus".
Posted by Margie's Musings at 5:46 PM No comments: 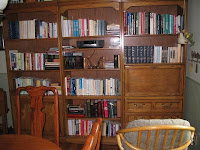 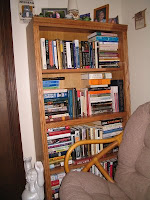 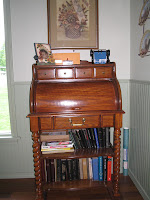 Today I was reading the blog of Judy from "Living On The Other Side Of The Hill" and she displayed the bookcases her husband built after he retired. They were beautiful! That reminded me of my own obsession. I have three or four bookcases all full of books. I sell books constantly on Amazon yet replace them with even more books.

Above are some of our bookcases...full of books.

I am currently reading three books. One is "American Apocrypha". Another is "The Pagan Christ" and the third is John Grisham's book, "The Summons". When I get tired of reading one of them, I read awhile in another.

Last month I presented my paper on the Apostle Paul at the Symposium. I am thinking of writing another paper and this time on the development of the Jesus story in the scriptures. That's an interesting subject.

Anyhow, these bookcases just keep getting filled up no matter how many books I sell.
Posted by Margie's Musings at 4:29 PM 5 comments: 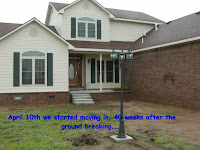 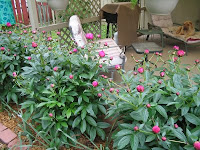 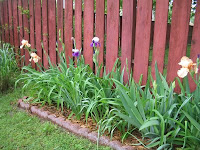 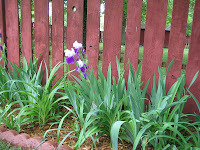 Yesterday was so busy that I never got around to posting about it. Scott came Friday morning and we went to lunch with Leslie. Then Friday night they invited us out to the new house to see all the pictures they hung and for a chili dinner. I made a cherry pie cake and took some vanilla ice cream for dessert. We had a good time. I took their completed scrapbook to them.

Then Saturday we went to Bartlesville and Scott bought some cologne and we had a light lunch at Garfield's. We went to John and Leslie's later and Scott loaded up a twin bed they gave him. Then we came home and watched another episode of "Band of Brothers" on DVD.

We had invited John and Leslie to go to Tavern on the Plaza with us for dinner. Half way through the afternoon Scott got a phone call from a guy who had partnered with him to run an Iraqi Police academy in Iraq. He wanted to hook up with him again. We excused Scott from dinner so he could get back to Fort Leonard Wood in time to meet that fellow.

So John and Leslie met us for dinner by themselves. We had a good time anyhow. I haven't heard from Scott this morning.

Last night at 2:00 AM Missy decided she had to go out. I got up and let her out. An hour later Slinky needed to go out. When I let him out and back in she came back in. An hour later she wanted out again. I put her out again and then Slinky wanted his breakfast...at 4:00 AM. I bawled him out and told him to get back to bed. He did. Then I went back to bed. I finally gave up and got up at 6:30 and fed him and let Missy back in. What a night!

The pictures above are of my hybrid iris that are just beginning to bloom and my peonies that are struggling to bloom after all this chilly weather and rain. The other photo is of their new completed home. they will do the flower beds and the front walk themselves. They also will do a small deck on the back and pour a patio there.
Posted by Margie's Musings at 7:55 AM No comments: