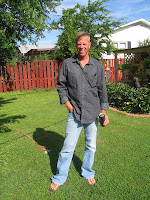 Our son, Scott, from Fort Leonard Wood came for the weekend to visit and we had a really good visit. He will leave Sunday morning because he has a date waiting in the Ozarks. This afternoon, our daughter, Leslie and her husband, John, invited us out to swim in their pool. They will meet us later at the Tavern on the Plaza for steaks.

They are preparing to begin a new home, their first in thirty three years of marriage. They are very excited and I can't blame them one bit. I am so glad Scott got to go out and see his sister and brother-in-law. He is so alone.
Posted by Margie's Musings at 4:09 PM No comments:

What's with this congress? After holding out for months, the Democrats have passed the war funding bill...without any stipulations. Then they are going to pass the FISA act too today, allowing the government to spy on all citizens without a court order. That is treasonous. It is unconstitutional.

It all began with Nancy Pelosi saying there would be no impeachment for this treasonous administration. What is the deal the Democrats have made with the administration? It is a mystery. The Republicans impeached Bill Clinton for lying about an affair but we are giving a pass on this administration which has committed high crimes and misdemeanors against the American people. None of this makes sense to me.
Posted by Margie's Musings at 8:52 AM No comments: 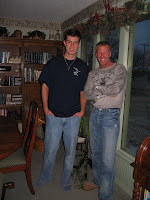 I am angry with my youngest grandson. He is just graduating from Coast Guard boot camp and was to have come to Fort Leonard Wood to see my son, his father, for his nine day leave. He was to have called last weekend to tell him where and when he would be coming in.

My son did not hear from him so he didn't know whether he would be coming to Springfield ot Saint Louis. Out of desperation, Scott called his ex-wife to see if she had heard from Jerod. Sure enough, he had decided to go visit his mother instead and didn't even bother to tell his dad. I was furious with his inconsiderateness.

It is just another of his signs of immaturity. A mature person is considerate enough to call about a change of plans and not just expect a person to figure it out for themself.

I have written to him ever since he went into the coast guard but will not bother to write him again. He has never answered any of my letters anyhow.
Posted by Margie's Musings at 5:58 PM No comments:

I spent yesterday afternoon working on my sister's computer. They had 501 spyware clogging up their machine. The new AVG anti virus free has added free spyware protection. It took well over an hour to scan their entire computer but we got it done. They have a dial up connection so it took nearly three hours to just download the program. That is just another reason why I am glad to have a cable connection.
Posted by Margie's Musings at 7:48 AM No comments: