I have planned for a month to attend the Restoration Studies Symposium at Independence, Missouri. Whomever planned the dates for this symposium wasn't thinking... that's for sure. We are forecast here for freezing drizzle tonight and even worse, Independence Missouri, is forecast a 90% chance of snow on Saturday.  It appears I will not get to go since I would be driving north into a  mess. I will just lose my $55 registration. How disappointing! Oh well, there's absolutely nothing I can do about the weather.

I will run my vacuum sweeper today. I have put it off this week thinking I would do it the day before I leave.

Well, that's a problem. My old vacuum sweeper quit working. I took it in to Liebert Brothers but this time it may be dead.

Here's Missy as she sleeps in her chair and  covers her eyes. 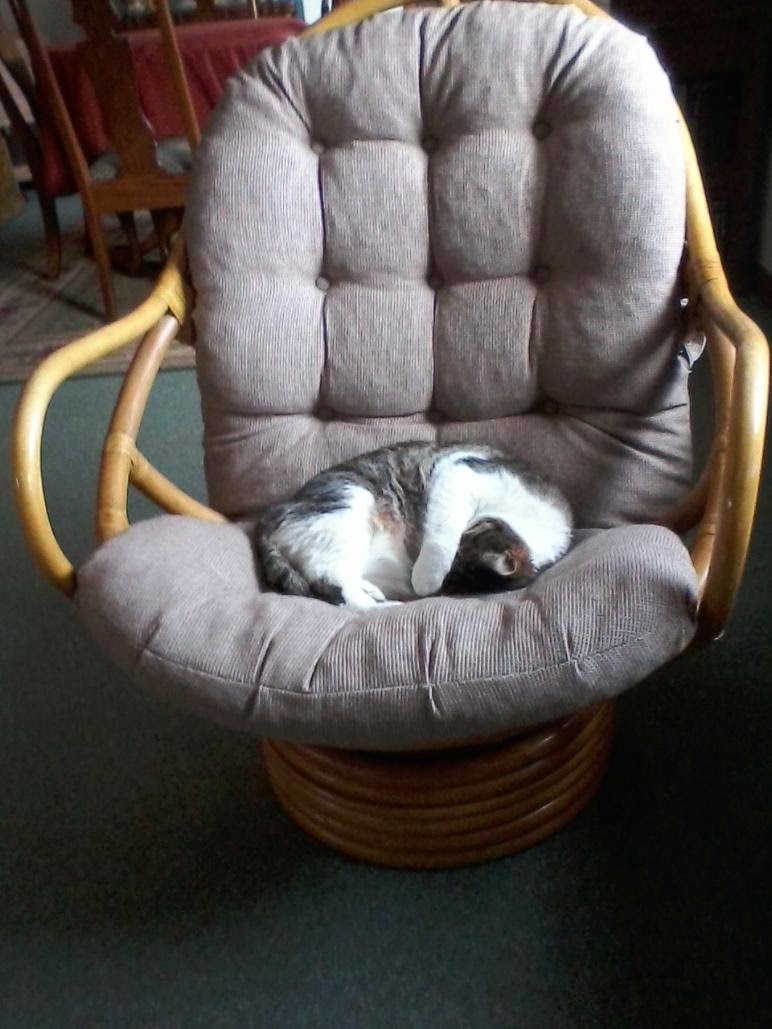 She's such a funny kitty!

Bob and I went out to El Pueblito for lunch and he bought my lunch. He says I cook for him all the time so he wanted to buy my lunch. That was awfully nice of him.

I will put some chicken strips out for tomorrow..

This is another really cold morning. It's 12 degrees out there. I called Bob a little while ago and suggested hamburgers and french fries for our lunch today. He will bring the buns. I have hamburger patties and have them thawing now. John and Leslie provide them so they are really good lean home grown beef.  I have potatoes for the french fries. He also has coke for our drink. I have set the table already.

We will leave about 8:45 for our exercise class. I slept differently last night. I watched the president's speech last night and went to bed about 9:30. Bob was over earlier in the evening and we had wine and cookies and watched a couple of episodes of The Big Bang Theory before he went home. I woke up at 1:15 and thought I would never get back to sleep. Finally I got up and drank some warm milk and got right back to sleep and slept until 6:30.

I thought the president's speech was good. He is very articulate. And he made himself very clear to Congress. He wants to work with them but if they don't want to help, he will use his presidential powers and just accomplish what he can with just his signature. All presidents have to revert to that eventually to get anything accomplished and this president has used those powers less then anyone since Grover Cleveland.

Oh, by the way, Missy must have just overloaded her stomach. She didn't get sick again last evening.

It's another cold day. I do not like winter. I just look forward to spring with great anticipation. And its a month and a half away.  The cold goes right through my bones. I believe it is 18 degrees this morning. And it will be doing well to get above freezing.

I tried to order a couple of Euro pillows this morning from Penneys. They would not accept my Penneys credit card number...why I don't know. When I order anything I always pay in full before thirty days is up. I've had a lot of trouble with Penneys since I moved anyhow. First they lost the bamboo blind I ordered for my living room here. Then they lost a coverlet I had ordered but billed me for it anyhow. I called them about that and was told they knew it was lost in the mail and when I asked them why they didn't contact me if they knew that, I was told they simply couldn't call everyone whose order was lost in the mail. They managed to bill me for it anyhow. I scolded them for that and they took it off my bill. Now, they don't accept their own credit card number. I just closed the window with disgust. I will get the Euro pillows at one of their stores next time I'm there. I may go there while I'm in Independence, Missouri next weekend.

I will go to Independence and get my hair done today. It is a mess...too much wind.  I want to make stew today for lunch. I will have garlic bread with it.

I got my hair done a little early and got home in time to go with Bob to his doctor's appointment. We got home late but I had already made the stew so all I had to do was heat up the oven for the bread and pour some frozen fruit into dishes for dessert.

I baked cookies this afternoon after I got an hour's rest.  Bob will be coming over this evening after 6:00 to watch TV with me.  Since he's taking care of Missy for me while I'm gone this weekend, I will give him permission to eat some cookies as a reward. :) I got all the dishes caught up and then emptied the dishwasher.

Missy just got sick and lost all the cat food she had just eaten. Luckily she was in the kitchen and so I grabbed some paper towels and the cleaner and got it right up. She was still choking a bit so I let her out for a little while. What now?

It's a cold Monday at 12 degrees. After a temperature of over 60 degrees yesterday that was a rude awakening this morning.. I will go to exercise class with Bob this morning in a couple of hours. I had my usual biscuit for breakfast so I could take my medicine. I am currently just enjoying my morning coffee . I will look for Karan's cell phone while we're there. She left it there on Friday. They called to see if the clerk there could find it but she did not see it anywhere. Someone may have picked it up. If so, they will need to get it cancelled and get her a new phone.

It looks like the weather may be fine for my trip on Friday.  It will be in the 40's. I can handle that just fine.

Today for lunch we will have the leftover lasagna and salad and a veggie. I will put out some frozen fruit for dessert.  I will need to get some garlic toast to go with it. I forgot that at the market last week. I gave the other half of the leftover lasagna to Bobby since Karan is doing Nutrasystem. She has lost ten pounds now. It seems to be working. The trick will be to keep it off. I find I need to weigh every day to accomplish that for myself. I gained five pounds over Thanksgiving and have not been able to get that off .

After yesterday I can understand that. We ate lunch at Sirloin Stockade and then went to Marilyn's for the Living the Questions group.  She served pasta and everyone else brought stuff that went with it. I overate...that's for sure. She gave me back the bowl I took her spaghetti in. She also gave me two tiny oranges and some candy in the bowl.  I gave Bob one of the oranges but kept the candy. I'll have it for a treat.

I spent the afternoon doing my congregational newsletters . I don't know what is on the agenda today after the exercise class.  I would like to go to Bartlesville but I don't have a reason to go. I would probably just spend money I don't have to spend.  I would need to go after lunch too.  We will see....
Posted by Margie's Musings at 7:18 AM No comments:

This Sunday is supposed to be up in the 60's. Then tomorrow, it drops back down in the 20's again. Winter just can't seem to  make up it's mind.

Bob came over last evening and we watched several episodes of The Big Bang Theory after we watched the news.  Tonight we go to Marilyn's for the Living the Questions group. We will eat dinner there before we watch our video and have our discussion.

I will preside at church this morning and then we will go eat out somewhere together.  When I get home I will do my congregational weekly newsletter .

Next week, on Friday, I leave for Independence, Missouri, for the Restoration Studies Symposium.  Bob will take care of Missy while I'm gone. He has a key to my apartment and lives next door. She likes him and accepts him.  I will be back home Sunday mid afternoon. Looking at the weather, it appears it will be cold but dry.  As long as it is not raining or snowing, I can drive up there with no trouble. I have done it dozens of times. It's about a three hour drive.  I will have my hair done first.

When I get back home, we will watch the Superbowl. Outside of a couple of playoffs, I seldom watch football on TV.