We had a wonderful time in Branson Friday and today! We went out to Silver Dollar City yesterday and spent most of the day and ate lunch out there then went to find our rooms and take a nap. Myra had not slept well at my house so she was really tired. After a nap, we all three went over to Pinetta bread and had soup for supper. Then we took a drive around Branson to see the tornado damage and show Myra. Then we went to the Pierce Arrow show and then afterwards back to the motel to watch some TV and then took a bath and went to bed. The Pierce Arrow show was wonderful! But we were all three exhausted!

This is Bob and Myra out at Silver Dollar City before lunch. 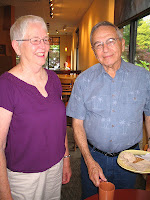 I have never figured out how to close the spaces between comments with HTML. So there is a lot of open space between the photos.

The second photos is Bob, patiently waiting while Myra and I shopped. 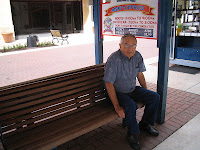 Yesterday while we were out at Silver Dollar City, the appliance repair man from home called to say my part had expectantly come in and he wondered if I wanted him to go to my house and install it. It was a surprise for all of us. I was delighted! I gave him the combination to my remote door opener and he did just that! So when I came home, I came home to a repaired refrigerator.

This morning we went to Branson Landing and shopped. We all got some things. I got new shoes, earrings and a T-shirt, Myra bought TV shirts and earrings, and Bob bought new slacks. We then went to Olive Garden and had dinner. Then we came home. It was lovely...not too hot and not too cold. Just right!

It was a wonderful time and I got home to discover I had a cute Mother's day card from my oldest son. How sweet he remembered!

And while I'm at it I'd like to say I'm proud of the president and Vice President Joe Biden too. They said some things this week that have been needed to be said for some time. Vice President Joe Biden asked this poignant question about "Who do you love?" He was acknowledging that same sex marriage can produce some very fine parents just as conventional marriage can. Then the president joined in the discussion with an ABC interview with Robin Roberts by saying his opinion had "evolved" and now he was able to accept same sex marriage.

What possible difference could it make to conventional marriage to allow same sex couples to marry? Lord only knows heterosexual couples have ruined many a marriage with infidelity and divorce and same sex couples won't be able to damage conventional marriage. That premise is stupid. They should be able to have equal rights. What does it take to help a person change their mind on this issue? It takes really getting to know a really fine person only to learn they are homosexual.
Posted by Margie's Musings at 6:10 PM 2 comments:

Today is the last day I work this week. First though, I am going back to Independence to have my hair done again. I want it to be easy to care for while we're in Branson. I will then go to work.

Myra will be here this evening. I will pack after work. We leave at 7:00 in the morning. I checked the weather at Branson and it should be nice..through cool. I will take a sweater...just in case.

I got the guest room bed remade before I went to bed last night. The bathrooms are clean and the bare floors are clean. I might need to run the sweeper again this afternoon after work. Missy sheds terribly.

I want to leave the house clean so I can come home to a clean house (and a hungry cat). I have asked Cyndi to come feed Missy Saturday morning. I haven't heard from her about it though. I hope she gets back with me sometime today.

Yesterday Aime, the director of the program for which I work, came to the office to have me sign some paperwork. She says everyone will be rotated to different offices in a couple of weeks. She has more clients then she has sites though. She may leave me at the present site. We will have to wait and see.

I came home at noon today to find that my nine year old refrigerator had stopped running and there was water on the floor. I grabbed a towel and mopped the floor up before the water got under my laminated dining room floor. That happened once before right after we put it down. The floor..or most of it, had to be replaced. This time I quickly turned off the ice machine and called a repairman. He came right out and tried to put in a substitute starter but then it wouldn't work so he turned the frig off and will order the part. I took my food over to Bob's and put it in his freezer and frig. I am not going to let this spoil my trip.

This will be a quiet day..outside of work. I have nothing planned for this evening so maybe I can get some housework done. I need to clean both bathrooms and run the swifter again. Missy sheds continually.

I can get some things done this morning if I can train myself to stay off this computer. :)

I got both bathrooms cleaned thoroughly this morning before work and I have the extra bedroom bed stripped now and the sheets are in the dryer. It's 9:19 and I want to get that bed remade before I go to bed.

I mowed after I got home from work this evening. The mower actually started. I also mulched a couple of flowerbeds and finished the small wall around my flowerbed by the mailbox. I then put some soil in it and weeded it. It looks much better. I will trim the first of the week or Sunday afternoon. I speak at church on Sunday morning.

I want to pack tomorrow sometime. We will be leaving early Friday morning. Myra is coming tomorrow evening. She will spend the night.
Posted by Margie's Musings at 6:31 AM 2 comments:

Today I will leave early morning for Independence and my mission of finding a specific grave at the cemetery. That may take some time. I also need to stop by a store there and get some moisture emulsion to use under my makeup. I might go to Wal mart there too. I need some Clean and Clear, the face wash I use to clean my face in the shower.

If I can find that grave, I will take a photo of it for my classmate.

Tonight I have library board and library foundation meetings after work at 5:00.

More later about my success with the grave location.....

I went in to work today. I filed for a couple of hours and then spent the rest of the day removing staples from old files so they can be microfilmed before they are destroyed. I finished those two shelves today.

Tomorrow I will take the morning off. I promised an old classmate I would try to find his grandfather's grave and take a photo of the headstone. He is writing a book about his family. Then I want to get my hair done and cut. I will go into work at 1:00 and make up the time by working until 5:00.

I am so glad Bobby got my lawn mowed on Saturday. It rained this morning and I would not have been able to do it tonight. It's too wet. I made peanut clusters and took him a batch to church on Sunday. Then I felt a lot better about his working on my mower and mowing for me. I will not mow again until next Monday. The afternoon was lovely.

This evening I noticed I had about a dozen peanut clusters left that I could not get into Bobby's container so I divided them into two containers and took one of them over to my brother-in-law and will take the other to Carol for re-combing my hair last week. My brother-in-law helped me clean the church on Saturday.

I went to the market and bought the pans and cake mixes and icings and eggs for the cakes next Tuesday. I will need to take mine to Bob on Monday evening because I will be leaving before eight to pick up Juanita for our trip to Wichita. He is going to take them to Independence while I am gone to Wichita.
Posted by Margie's Musings at 7:50 PM No comments:

This will be another busy Sunday. In another couple of hours, Bob A. will come by to pick me up for church. After church, we will eat somewhere with the group. Then I will come home and do the newsletters I send out each Sunday afternoon. Tonight I will just stay home and watch TV. I watch 60 Minutes first then Harry's law, if it is on. 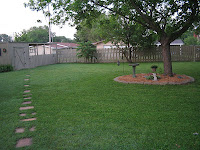 My yard looks so nice! I am so happy it's done at last. Last evening I went to the market and bought the makings for peanut clusters and made a batch for Bobby. He loves them and I usually only make them at Christmastime. But I am taking them to church to give to him. It's the least I can do. I am taking a photo of my yard to post here to show you all how nice it looks.

Well, Harry's Law was not on TV. And I was not interested in 60 Minutes tonight.

After lunch I came home and loaded up all my scrap booking material and took them out to Leslie's. She and a co-worker are going to make a scrapbook for their boss. I stayed a couple of hours and visited with her. I seldom get to have any private time with her anymore.
Posted by Margie's Musings at 6:34 AM 4 comments: