This was the day of the Home Show in Coffeyville and I spent most of the day out there. I finally ran out of brochures about 3:00 so I packed up and came home. It was not as large as when I worked there in the 80's and 90's but then radio was a lot more successful in those days.

My brother-in-law came out to discuss his situation with me while I was there. He had been to see his doctor Friday. He wanted some advice about my sister. She had him up five or six times in the night the other night and he got virtually no sleep. She is heavy enough that he has trouble managing her and she could not walk. Dr. Allen said the time may have come when he would have to put her in a nursing home with an Alzheimer's Unit. I had to agree with him.

In the event he needs surgery for his lymphoma, he will not be able to take care of her for at least six weeks. Then he can make the decision of what to do from that point. I was telling my Bob about it after I got home. I know my brother-in-law will need some care after his surgery and I told him to come stay with us until his six weeks check up. His local daughter has her hands full with her child and an invalid husband. We will see what he decides. Luckily, I have my health and can care for both Bob and him if needs be.
Posted by Margie's Musings at 3:24 PM No comments:

It rained a quarter of an inch early this morning. It was over by 7:00. We went to the Medicine Shoppe and picked up Bob's chest wrap and then went to Independence this noon and took Leslie to lunch.

Not much going on here. If Bob doesn't take Slinky for a walk, I will. It has been several days since that poor dog has been out of the back yard.

Tomorrow I will work the table at the Home Show for the clinic. I will try to fold down my back seats and get that table in there. If I can do that, I will not trouble my brother-in-law.

It worked. I knew one side would fold down but I was not aware that both would. I can take the table myself.

More on Bob. His lymphedema is getting worse. He says he now has another group of enlarged nodes. Hopefully he will learn something after Wednesday.
Posted by Margie's Musings at 2:02 PM 1 comment: 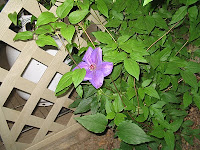 We went to Bartlesville this morning and had the new seat belt buckle installed on our car. They washed and vacuumed it out for us too. We stopped at Caney and ate lunch at Caney Kitchen, the only place around where two can eat for under ten dollars.

Bob will leave at 2:30 for his last massage. He intends to cancel the rest of his appointments. They don't seem to be doing any good and she will be leaving the first week in May anyhow.

I have been paying bills. There isn't much left for the rest of the month but there's only a week left.

I did get my creeping phlox planted. Then I had to run Slinky out of the flower bed three times. That dog!!

It still has not rained but it is forecast for later this evening and Friday.

I took this photo this evening. It's my first clematis bloom this year.
Posted by Margie's Musings at 12:59 PM 2 comments: 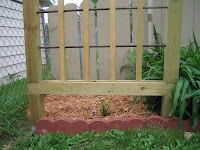 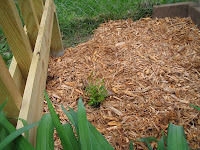 I went to Independence to get my hair cut and fixed this morning. Afterward I picked up Juanita for breakfast. I stopped by the clinic to pick up the materials I will need for Saturday at the Home Show. I then took Juanita home and then I came back home. I stopped at the nursery and bought a clematis for the new trellis and flowerbed. I want to get a hosta too but that will have to wait.

It still had not rained so I went to Orchelon's and bought some more mulch. I weeded the flowerbed where the clematis will go and planted it. Then I mulched the rest of the backyard flowerbeds. You can see these flowerbeds on the Tuesday blog.

While working in the yard or loading the mulch or going for the paint for the living room wall, I somehow misplaced or lost my cell phone. I called it a half dozen times but could not hear it. Bob was going to backtrack my morning here in Coffeyville to try to find it. While he was gone, I went to put some trash in the trash container outside. And there laying on the ground next to the trash container was the cell phone. It had not yet begun to rain so I was home free with that gadget. I called Bob and told him not to be concerned, I had found the thing. We were both releaved.

Just another nutty thing I have done. So what else is new.
Posted by Margie's Musings at 2:43 PM 2 comments: 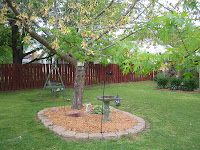 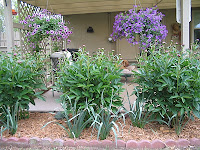 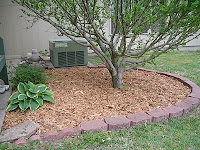 This has been a very busy day. This morning my niece stayed with my sister and I took my sister's husband to Bartlesville for a colonoscopy. He has lymphoma and they have been watching it for a year. They now have decided he must start treatment. They removed five polyps. They will biopsy them and get back to him in five days. He is the primary caregiver for my sister who has Alzheimer's Disease. I am not sure what he will do about that if he must have chemotherapy. I told him I wasn't sure what my situation would be with Bob's lymphedemia. If it turns out to be lymphoma, I will probably have my hands full here at home. If it isn't and I am not going to be the primary caregiver for my Bob, I will try to help him. He may have to put Phyllis in a nursing home for the first 100 days. Time will tell what both Bobs will face.

After I got home, I started working on my flowerbeds. I lined two of them and mulched them too. Tomorrow, if it doesn't rain, I will take some photos of them. I also found another two hanging baskets at the market.

First I will go to Independence to get my hair cut and go to breakfast with Juanita. Then I will run by the clinic and get the poster board and photos for Saturday. Saturday I will work our clinic's booth at the Home Show. I do that each year. This year the Home Show is going to be held at the rec center at Walter Johnson Park. I am glad of that. The armory has not been a very good place to hold it.

I am concerned about both Bob's health problems but am just taking it one day at a time.
Posted by Margie's Musings at 9:29 PM No comments: 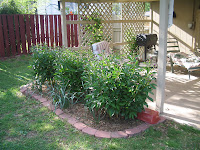 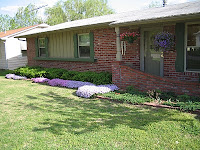 I am getting extremely impatient to get flowers planted. The phlox are in bloom and I have two lovely hanging baskets that I got at the market for $9.95 each. I have been watering them regularly.

This afternoon I worked all afternoon in the yard. I weeded a new flower bed and got it ready to live with pavers tomorrow afternoon after it warms up.

I took some photos of the peonies just ready to bloom and the creeping Phlox just in bloom. I can hardly wait until the danger of frost is past.
Posted by Margie's Musings at 5:28 PM 3 comments:

My daughter and I gave our conference reports today at church. It went well. No one had a problem with any of the legislation at all. The Words of Council passed without a hitch and those who were opposed were civil and respectful of others. No wonder I am so impressed with our people.

There were several impressive stories. The speaker of the opening day was the executive director of the National Council of Churches, Rev.Dr. Michael Kinnamon. He told of growing up just west of Lamoni, Iowa where our university is located. He then moved near our church headquarters at Independence, Missouri. Later his father was transferred to Salt Lake City. He said "I know who you are and I also know who you aren't". He is very much in favor of our membership in the National Council of Churches. Time will tell if that works out.

To illustrate the different cultures represented in our church, one man told of his struggle. He is from Africa. His brother died from Aids. His culture expected him to take his brother's wife and have children for his brother with her. He already had a wife and did not want to do that so he argued with the village elders. She died soon afterward of Aids. That relieved him of that conflict.

In some places in Africa and also Haiti, if you even discuss homosexuality, you can be burned to death or stoned to death. So that is a taboo subject.

In India, where the church is also located, women are also treated terribly. They have no rights at all. They have no say in the family. If they earn money, they have nothing to say about the way it is spent. They must surrender it to their husbands. They are required to cover themselves from head to foot and if anything bad like rape happens to them, it is considered their fault. They are ostracized from their family and must resort to begging or prostitution to survive.

So there are very different cultures throughout the church. Some of these issues will have to be handled on a local basis and not by the International Church. Therefore, we will begin, within two years, to hold regional conferences to address such issues.
Posted by Margie's Musings at 3:09 PM No comments: