Bob and I cleaned house this morning. I couldn't stand it anymore. Everything is nice and clean now and I feel better. I even did three loads of laundry. After that we went to Caney to Mayfest and luckily it was a lovely day. We saw a lot of people we knew from our stint of 11 years in Caney.

Then we came home and went to the market. We bought $57.00 worth of groceries. It seems like every time we go we spend at least that much. Now I have had a light lunch and am going to take it easy this afternoon.

Tomorrow after church, I will make my potato salad for the cook out dinner for Bob's birthday on Monday. I will bake the cake Monday morning. Leslie has invited Jeromy and Marlene and Denise and Terry and Dee and I invited Bob and Phyllis so the whole family should be there. I hope the lovely weather holds. If not, we may have it in their garage.

On June 20th, our grandson, Jeromy, and Marlene are being married. They will be married at John and Leslie's new house...perhaps in the yard. Leslie wants to get the pergola up just in case they would like to use it. They have less then a month to get things ready. It will be exciting. They want to build a small new home out on John and Leslie's land.
Posted by Margie's Musings at 12:37 PM No comments:

We are going to Owasso as soon as Scott comes back from his run this morning. He wants to look for a short sleeved body shirt there. There is a large new shopping center at Owasso.

Other than that, Bob wants to mow again this afternoon. I will probably do some cleaning since I did not clean on Monday as I usually do.

Tomorrow, Scott will go to his class reunion and we will go over to Caney for Mayfest. If he goes with us, he may see a lot of his classmates. Tonight we will watch the video that Scott rented. It is "Valkyrie".

Sunday is church as usual and we may eat out then and in the afternoon nothing is planned for us except just to do my regular notes and rest up. There is no "Living the Questions" this Sunday evening.

Monday we will have Bob's birthday party and afterwards Scott will leave for St. Robert. So Monday morning I will bake my cherry chocolate cake. Leslie is going to make homemade ice cream and we will cook hamburgers out on the grill there.
Posted by Margie's Musings at 7:49 AM No comments: 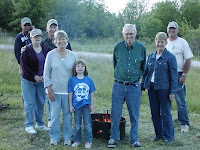 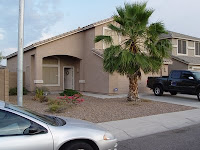 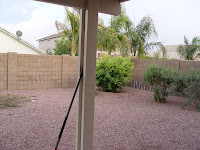 Well, Scott came last evening..a day earlier then he thought. Our small church group went out to John and Leslie's to fish and have smores. John took us on a long ride in his prairie schooner first. Only nine showed up. Cyndi and Jeff intended to come but Cyndi went out to their Jefferson house to take some pictures and was attacked and bitten by a pit bulldog. They took her to the emergency room and then called me. I went and spent the day waiting for them to work her into the surgery schedule. The dog got hold of her left heel and ripped it in three or four places. The surgeon cleaned it up and then loosely stitched it up. They are fearful of infection and do not want to trap the infection in the heel. I left when they took her to x-ray after she came out of recovery.

She called last night to talk to me. She was in quite a bit of pain but is allergic to all types of pain meds. The only one they could give her was just for three days because it often damages the kidneys if it is taken longer.

Then Marilyn called yesterday afternoon to say they would not be able to come. Their little grandson had something bite him in their back yard and his eye swelled and they took him to the doctor for some type of steroid. Then Sue's guests also had a medical emergency. Strange...everything happens at once.

I got an e-mail from our older son yesterday with photo's of their new place. It too looks very nice. He lives in Phoenix so we don't see much of him. He is great about calling though and keeps in touch real well. I will try to post a photo of his new home and yard. The photo at the top is our evening party last night at John and Leslie's home.

Today, our niece called. They had got as far as twenty miles north of Neodesha and their car quit on them. I went up to pick them up. Then when we got home, we went to El Publito and had lunch. This afternoon, I have read some and started dinner. I put a roast in a slow cooker with a potato and some carrots and we had that for dinner. I had some apple brown betty with a scoop of ice cream. Neither Scott nor Bob had any. Scott is trying to watch his weight and Bob has diabetes. (Scott decided to have some after all)

We will watch a video this evening and go to Owasso tomorrow to shop around to mainly kill some time.
Posted by Margie's Musings at 7:52 AM 2 comments:

Today will be busier. I have a hair appointment in Independence this morning at 7:15 then we will go to Bartlesville for Bob's doctor's appointment with Dr. Eslicker, his dermatologist. Hopefully, there will be nothing more then freezing a few places. We may have lunch there. Scott will be coming tomorrow for the holiday weekend. It is his 30th class reunion. Monday, of course, we are planning the birthday cookout for Bob's 79th birthday at John and Leslie's house. She will also make homemade ice cream and I will bake a cherry chocolate cake.

Yesterday we transplanted a Rose of Sharon that I had let grow in one of the flowerbeds. I hope it will take hold and live. This ground is terrible here. The neighbor told us that this lot had been filled with rock before they put dirt over it to build. It had been a vacant lot for several years. Nothing much grows for long because as soon as the roots get to the rock underneath the plants die. So far we have lost two Weigelia, two Lilacs, and two Forsythia.
Posted by Margie's Musings at 5:33 AM No comments:

Yesterday was a tiring day although not particularly busy. I decided not to clean house for a change. I will do it Thursday instead. I puttered around the house most of the morning, read a bit, got my Minister's Message in the e-mail, worked on my blogs, read a few blogs and then read the rest of the morning.

We had a sandwich for lunch and then Bob said "Let's go out to the church and finish painting those sheds. We had begun that job during spring cleanup but the rain interrupted the job. It has rained here for four weeks until this week. So we spent the rest of the day working on painting those shed but now they look nice. Bob was completely worn out. We came home late afternoon and he took a nap but he really never did get rested up. He went to bed about 8:30. I stayed up until 11:00 and watch American Experience on TV. It was about the Kennedy family.

I let Missy Kitty out to sleep on the patio. I have discovered that if she is not sleeping on my feet all night, I get a lot better sleep.

I got up at 5:00 this morning so I could do this blog, feed the animals and go over to my sister's house at 6:45 while my brother-in-law went to breakfast with his classmates.

The rest of the day I will work in the yard and read. Every once in awhile, I need to take a quiet day.

At noon Bob wanted to go to Independence to take Leslie to lunch so we did that. Then he is taking his nap and I will read my book this afternoon till he wakes then we will go to the market and get a few things.
Posted by Margie's Musings at 5:30 AM No comments:

If you missed the president's speech at Notre Dame at the commencement exercise there yesterday as we did, do go to You Tube and catch it on four videos. I always thought Clinton was the greatest orator we have had as president but Obama has him beat. His sincere style and humble remarks were simply phenomenal.

I continue to be impressed with this president although I do not agree with all his policies, I do agree that he really is on the way to being our greatest president...if some nut doesn't assassinate him. That is my greatest fear where is is concerned.

I loved his comparison of being at a crossroads and a lighthouse. He spoke of Cardinal Joseph Bernardin who was the Archbishop of Chicago. "For those of you too young to have known him, he was a kind and good and wise man. A saintly man. I can still remember him speaking at one of the first organizing meetings I attended on the South Side. He stood as both a lighthouse and a crossroads - unafraid to speak his mind on moral issues ranging from poverty, AIDS, and abortion to the death penalty and nuclear war. And yet, he was congenial and gentle in his persuasion, always trying to bring people together; always trying to find common ground. Just before he died, a reporter asked Cardinal Bernardin about this approach to his ministry. And he said, "You can't really get on with preaching the Gospel until you've touched minds and hearts." "

What a great philosophy.
Posted by Margie's Musings at 10:24 AM 7 comments: 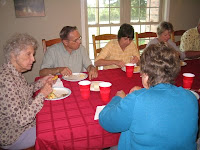 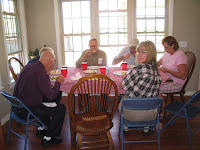 This will be a busy Sunday. I got up early this morning to feed the dog and the cat and get the papers read before I started to put together my apple brown betty. We will have Church School class this morning, followed by the worship hour ( at which I am speaking) and then we are all invited to the home of one of the members, a doctor, for lunch. We will take a dish and enjoy a dinner in her lovely new home. She lives right down the road from our son-in-law and daughter so the congregation is also invited to their open house.

The photos show the two tables full of us who attended the dinner. One is of the kitchen and one is her dining room.

We went yesterday so we will not go back I had not planned to go back this afternoon. Instead I planned to come home after lunch and I will do my notes and letters. However, Bob wanted to go so we did.

This evening we have Living the Questions group meeting at another person's home. It begins at 7:00 PM.

Besides that, there is a possibility that Scott will come home this week. He is on leave all week. Next weekend is his 30 year class reunion. The 25th is also his dad's 79th birthday. Leslie, our daughter is fixing homemade ice cream and I am baking a chocolate cake for that occasion. We may have a cookout if our son-in-law is up to that. We hope Scott will be with us for that too.
Posted by Margie's Musings at 8:10 AM No comments: