I took Slinky for his walk this morning about 9:00 and as usual, he was delighted. I called one of the board members from PINCH this morning about the table covers I have for the dinner at the senior citizen's for the PINCH pot luck dinner this evening. They were decorating at the time so I went down there and helped. I told Sharon I would come back at 4:00 with my meatloaf.

Then I went to see my grandson this noon and picked up the owners manual for the table saw I sold. Sure enough, he had it and gave it to me. I gave him the one for the nail gun.

Then I came home and mowed while I still could. I haven't trimmed yet. I will do that later. I had to work over my hair after I mowed.

I's better get in there and get that meatloaf baked.

The meatloaf was a big hit. There's just a tiny bit left and that was two pounds of meat. The PINCH pot luck was also a big hit.
Posted by Margie's Musings at 2:10 PM No comments:

Fact Checking the Pledge to America

"Fact Checking ‘The Pledge’
Republicans' "Pledge to America" falls short on some of its facts.
September 24, 2010

It declares that “the only parts of the economy expanding are government and our national debt.” Not true. So far this year government employment has declined slightly, while private sector employment has increased by 763,000 jobs.

It says that “jobless claims continue to soar,” when in fact they are down eight percent from their worst levels.

It repeats a bogus assertion that the Internal Revenue Service may need to expand by 16,500 positions, an inflated estimate based on false assumptions and guesswork.

It says Obama’s tax proposals would raise taxes on “roughly half the small business income in America,” an exaggeration. Much of the income the GOP is counting actually comes from big businesses making over $50 million a year."

We really need to check our facts before buying into any of this stuff.
Posted by Margie's Musings at 5:32 PM 5 comments:

Another night of poor sleep.

Today I will have breakfast out with one friend and dinner out with another. Otherwise I will go to see my sister again this morning. I have not seen her since Monday. At that time, she wanted me to bring my car around and take her home. Of course, I can't do that.

I was going to paint my patio bench yesterday but the paint was dried up. I also want to paint the swing. Rain is in the forecast though. I don't know when I will get those two chores done.

Tomorrow I will go out and see the progress on my grandson's house. He said they got the slab poured and also the driveway. I am anxious to see it. I also want to pick up the manual for the table saw I sold yesterday.

Tomorrow evening I will attend the PINCH pot luck dinner.

I never made it to see my sister. I took all of Bob's clothing down to Bartlesville to Goodwill and donated it. Then I came home and proceeded to re-organize my closets. I am really not finished yet but I am tired.
Posted by Margie's Musings at 4:04 AM No comments:

Well, I am going back to Independence this morning to a hair appointment at 10:15. I haven't been able to do a thing with my hair this week and I thought it would be more manageable since I had it cut last week. Maybe it's my shampoo. After that, I will come back home and go to lunch with my grandson at 11:30.

I awoke at 3:00 AM again this morning and lay there for almost two hours before I decided to just get up. I had been sleeping much better and had hoped that the sleepless nights were over.

I advertised Bob's table saw on KGGF day before yesterday. I wanted $100 for it but did not have one call. I will try again next week and ask $85.

Bob A. called last night and told me about his latest visit with my sister. He said she wanted to go home with him again. When he tried to explain that he couldn't take her home because she couldn't walk without a walker and had been falling, she began to cry. I think that is harder on him then when she gets angry.

Tomorrow I will have breakfast with a friend. Scott will not be coming this weekend. He has decided to go to Ardmore instead. That's fine. I know he has a very limited time to spend with his girlfriend before he is deployed in November. I will go to the PINCH pot luck dinner Saturday evening. I have my meat thawing in the frig for my meat loaf. I need to stop at the church this morning and get the plastic table covers for the tables at the PINCH dinner.

I don't know what I will do this afternoon. So, more later....

When I got home from lunch, I had a message on my machine. It was an Independence resident who bought Bob's table saw. Now I need the manual. Jeromy accidentally picked it up Tuesday when he came and picked out the tools.
Posted by Margie's Musings at 4:57 AM 3 comments:

I'm halfway through the week.

I have an appointment this morning with my optometrist. I am on my last contact and it's been a year since my last appointment. I haven't had left eye contacts since well before Bob died in May. I need new contacts. I also need new glasses for the time I use them when I take out my contact in the evening. I probably won't get new glasses though. My old ones will do for watching TV and seeing but they aren't correct enough to use to read.

I will probably go check the antique mall today some time and see if anything might have sold.

By the way, for those of us that do not understand the health care law. This video from the kaiser Corporation tells the entire story in a simple way.

Copy and paste this URL into your browser.

I ended up going in to the antique mall and taking a few more things in. Sales appear to have slowed down now. I hope the sales start up again after payday. I think I will have more then enough to pay the rent next month.
Posted by Margie's Musings at 6:05 AM No comments:

My grandson is coming over on his lunch hour to look over Bob's tools. I have put his table saw on Open Line for $100.00. I hope to sell it. It's a Craftsman and Bob paid $200 for it. I need the space a lot more then I need the table saw. Jeromy is building a house so he can probably use a lot of Bob's tools.

I did some more cleaning in the garage this morning. I still need to blow it out. I did call the trash pickup people to pick up the empty boxes I have in the garage.

This afternoon I will attend the Chaplain In Service at the hospital at 1:30. Other then that, I have nothing more scheduled for today.

The In Service lasted two hours but it was a good meeting. I had a nice visit with Jerry, who is the Chaplain for CMA. He lost his wife in January. He is doing well. He is as busy as I am. That helps a lot.

Jeromy took a lot of tools and I was delighted that he could use them. He would like to have had my air compressor but I can use it to keep the mower's tires inflated. If I find that I don't need it, I may give it to him anyhow. He is such a neat kid. He has invited me to lunch on Thursday. I will meet him there at 11:30.
Posted by Margie's Musings at 8:50 AM No comments: 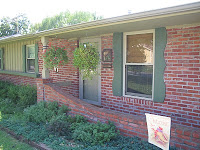 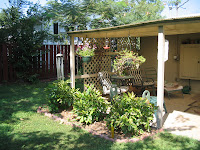 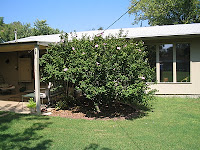 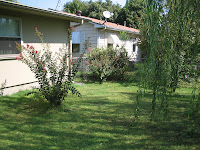 As you can plainly see nearly all my flowers are spent. They have found the weather much too hot this year. I must mow either tonight or in the morning. The yard has really grown since Thursday when I mowed.

I slept real well last night...thank goodness. I did my regular thing today...fed the cats and dog and took the dog for a walk. Then I stripped my bed and did the laundry. Scott called this morning. He is coming this weekend. We will go to the PINCH potluck dinner Saturday night where they are going to honor Bob for his plan to start these pot luck dinners.

After that I went to Windsor and visited my sister. I stayed a little over an hour. She was pretty lucid today and in fact, she started wanting me to take her home. We had a pretty nice visit until about thirty minutes into it and then she began to want me to bring my car around so I could take her home. I told her she has to be able to walk before Dr. Allen is going to release her to go home. Finally it was about their lunch time so I told her I had to go and I would come back later in the week.

Then I came home and hand washed my car. It looks pretty good on the outside but I stopped when I began to sweat badly. I will do the inside later, I guess.

It's after noon now and I still haven't eaten. I guess I will fix myself a sandwich out of peanut butter and jelly..

I ended up mowing and trimming before bedtime. I also pulled the grass out of my front flowerbed. I have an in service at the hospital on Tuesday and was not sure how much time I would have before 1:30 that afternoon to wash my hair so I did it before bedtime. I want to do some cleaning and clean up the inside of the car too.
Posted by Margie's Musings at 12:23 PM 4 comments:

This has been a big day. I got up early and fed my animals and made my coffeecake to take to church.

We had a small congregation at church. Some were out of town at a reunion. Others simply did not show up. But the fun part was that after the services, we all went to dinner together.

Then I met Leslie and she and I went down to Owasso to get some building materials for Jeromy and a fire pit for Her patio. That was fun and we had a good visit. I sent the rest of the coffee cake home with her. John and Jeromy and the gals can finish it off.

Tonight I will just watch TV. Tomorrow I will do my congregational letters.
Posted by Margie's Musings at 4:07 PM No comments: