Yesterday was an enormous day. We neither one slept much due to having to get up at 4:00 to drive to Tulsa for Bob to catch his plane. We ended up getting up at 3:00 and I came in to fix breakfast. We left at 4:30 for Tulsa and got there around 6:00 AM. His plane took off at 7:10. Then I drove home.

Bob had a four hour layover in Minneapolis and another four hour wait when he got to Fargo. They couldn't find hotel rooms and I was afraid he would have to sleep in a shelter. Finally last evening he called to say he finally found a room at Rodeway Inn and would have to share it with another fellow. Now it look like the national Red Cross and the motel owner cannot get together on price and he may have to move into a shelter after all.

I will be going to my three day retreat for pastors after all. A friend of mine will feed the dog and cat.

I went to Owasso with a friend today and found a new spring purse. I am fixed for while now.

I won't be blogging again until I get back sometime Sunday now.
Posted by Margie's Musings at 7:38 AM 3 comments:

He will be leaving tomorrow morning for Fargo, North Dakota, for three weeks. He is quite excited about going out on disasters again and it gives his life some real purpose which I think is good for him. He will be 79 in May.

I am delighted he wants to go. It certainly beats sitting in a chair most of the day reading.

When he comes home, our daughter's home should be finished. They didn't get quite all the floor in the great room finished but should have finished it today. They moved the carpet layers off to Friday just to be sure.

We live in a troubled world. Violence is glorified so much that we take it for granted as an everyday occurrence. We are no longer horrified when we read about it in the newspapers and see it on TV and in the movies. We have become sensitized to it.

We live in a world where a child dies every five seconds of hunger. 250 children die every hour from drinking unsafe drinking water and 300 other people die of malaria. Thousands die each day from HIV Aids. Entire villages die of starvation.

We know there doesn't have to be world poverty. There is enough wealth in the world that if all the wealth were redistributed, all the people on the earth would be rich. There is plenty of food on the earth for all. Think of what we throw away each day in restaurants, our homes and school cafeterias. In the US, farmers are paid not to plant.

Education, the way out of poverty, shouldn't be just available only for the affluent. In Norway and Sweden a college education is free to all. There do not have to be people sleeping on the streets and in parks. Old people should not have to face weeks on end without seeing a single person. Children should not have to go to school without breakfast. A living wage for everyone does not have to be just the idealistic vision of a group of wild eyed liberals, The nation does not have to spend billions on war.

We are God's hands in the world. We have the power to change these things if we could only wake ourselves up from our terrible apathy. Changing this world begins with each one of us.
Posted by Margie's Musings at 8:10 AM 4 comments: 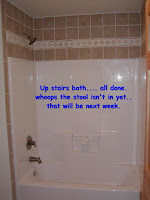 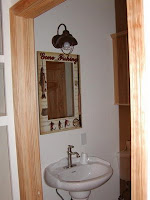 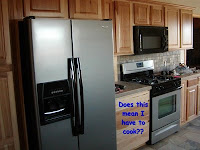 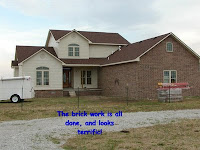 There has been real progress on my daughter and son-in-laws house this week. She sent me some new pictures this evening and I will work on their scrapbook again tomorrow and get it caught up again. I think a couple of more weeks will get them in the house.

They will have to do all the landscaping and install the garage cabinets themselves so there will still be plenty of work to be done.

The top photos are photos of their utility room bathroom and the upstairs bathroom. The middle one is of their new appliances installed and the bottom one is the west side of the house all completed except for the shutters, steps and walk.
Posted by Margie's Musings at 10:12 PM No comments: 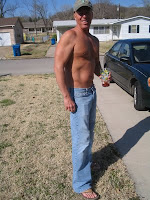 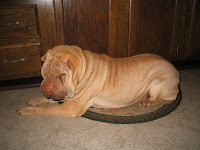 This is and will be a busy Sunday. We got Scott off for the post at 8:00 this morning then got ourselves ready for church.

Scott had a great time on his date. This girl already has a steady boyfriend though and she wants to be "only friends". I can't imagine how her boyfriend would feel if he knew about that. It sounds like asking for trouble to me. Plus the fact that Scott is looking for a wife. Most women anymore do not want to get married...especially if they have been married before. I gave him a book about that phenomenon. He read it but I don't think he got it.

Back to Slinky...of course I had to have Slinky in the kitchen for his cinnamon toast and a cup of food. Then when I cooked for Scott, he had to have his bacon grease and 1 piece of bacon on another cup of food. What a dog!

He patiently waits for his bacon.

We had 22 at church this morning which is acceptable for our small church. If everyone that is on the active rolls came at the same time, though, we would have 33. Then we have 8 more that come that are not members. That would make 41.

Our church encourages small congregations so we can build a sense of community among the members. They divide congregations of over 125. Our building only holds 50 though so if we ever reach 50 we will have to buy additional pews. I don't look for that to happen but you never know.

When we got home from church we went to eat out by ourselves. I think our daughter and son-in-law went to Bartlesville to Lowe's to get some odds and ends they forgot they would need for the new house. Their good buddies, Jeff and Cyndi went with them.

After lunch, we came home and Bob took his nap and I worked on my notes to the congregation. All but 5 go out by e-mail.

Following that, I worked on my son-in-law and daughter's new home scrapbook. I caught up the 36th week. She is going to send me photos of the 37th week (last week) tonight sometime and I will get them in the book tomorrow.

Later tonight we have "Living the Questions" group at Maritt's home at 7:00. First we will watch 60 Minutes then leave for group.
Posted by Margie's Musings at 2:16 PM No comments: