Bob and I went to see my sister yesterday evening and it was amazing the progress she had made. They had her sitting up in a chair and she had been bathed and her bed was changed and she was fully alert....as fully alert as she ever is. Bob, her husband, (we both have husbands named Bob) was out cleaning a shop he cleans in the evenings. Her daughter, Denise, was with her and had been all day.

My daughter and I are going to go to a holiday arts and crafts festival held at the recreation center here this morning. Then we will pop in and visit her. If she is doing well, they will move her into a room today or tomorrow. Then I will send flowers.

A couple of days in the room and she will go into skilled nursing for her physical therapy. There she can have the flowers my son sent to her and those her daughter in Wisconsin sent to her. That will cheer her up.

I hope she can recover quickly. I don't know what my brother-in-law will do about his holiday job. He may have to give it up. With her Alzheimer's disease coming on, he won't be able to continue too long anyhow. He will be her primary care giver.
Posted by Margie's Musings at 6:37 AM 5 comments:

A Night At The Hospital

I was with my brother-in-law waiting for my sister to come out of surgery all afternoon Thursday. Then I stayed last night all night with her. Phyllis is in ICU now here in Coffeyville. As you know, she broke her hip Wednesday morning and had surgery yesterday afternoon. Actually, her hip broke and she then fell. The orthopedic doc said the ball joint was mushy and there were a lot of splinters.

Then last night while I was with her in her room, she had an incident. Her heart beat went up to 225 and nine nurses worked on her for a half hour before they took her to ICU where they could treat her with a med that brought it down. It was down to 90 by this morning and she is a lot better. Now they are working to get her blood pressure up to somewhere near normal.

She will be in ICU for another day and the in a regular room for two days before being transferred to Skilled Nursing for therapy.
Posted by Margie's Musings at 8:51 AM 4 comments:

Well, everything I had planned got canceled today. A friend called this morning at 7:00 and said there was an ambulance in my sister's driveway and it had been there for quite awhile. She wondered if I knew. I called my sister's house but no one answered the phone. So I jumped in the car and ran over there. Sure enough the ambulance was still in the drive. My brother-in-law was in the front seat so he rolled down the window and told me my sister had fallen on the porch and had hurt her hip and couldn't get up.

I went home and called and canceled all my appointments for today and went up to the hospital. Sure enough, her hip was broken. It seems the hip broke and then she fell. She had just had a bone density test a couple of months ago and they said then that she was all right. Evidently not...from the looks of the x-ray. The ball was broken off the hip bone and will now die in the socket so the surgeon will replace the ball with a new one...probably stainless steel, and put screws in the bone to hold it. The surgery will be tomorrow afternoon sometime. It is not yet scheduled. She is in traction now.

So I've been in the hospital with her and her husband and daughter most all the day. As soon as we got out of the emergency area, my brother-in-law called their daughter, who came right up.

They have another daughter in Wisconsin and a son in Rogers, AR. They also have another son here in Coffeyville that they seldom see. My brother-in-law will contact him to tell him.

It never rains...it pours. She is in pretty good spirits though.
Posted by Margie's Musings at 4:11 PM 6 comments: 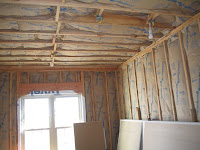 I will go to Independence for my Montgomery County Health Clinic board meeting this morning at 11:00.

I finally heard from the library on the job at the library. They chose someone better qualified.

My daughter's desktop computer is down and so she did not send me pictures of the progress on their house this week. I will go out there after my meeting and take some with my camera. I want to keep her scrapbook up to date. This picture is of a part of the kitchen showing the insulation they are putting in this week.

The rest of today is rather benign. Tomorrow is another story altogether.

My hair appointment is at 8:15, breakfast with Juanita is at 8:30, my appointment at the radio station is at 9:30, I have a meeting to plan the Martin Luther King service at 11:00, Bob has an appointment with the hospital dietitian at 3:00, and we have a dinner engagement at 6:00. Now that is a full day.
Posted by Margie's Musings at 8:19 AM 3 comments: 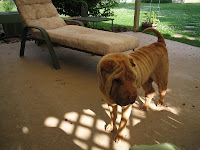 Dogs are something else. Now that it's colder I put Slinky in the garage at night. The only way I can get him in there is to offer him some cinnamon toast. Then he comes in. In the morning about 6:00, I hear one bark...then a pause...and then another bark. He wants out to pee. I get up and let him out in the yard. His tail wags nearly off his body.

Later, after I get the coffee made and one cup in the cup, he waits for his cinnamon toast. He sits down for it....without being told, he knows he won't get it if he doesn't sit down.

Later, he comes to the door and barks once, waits and then barks again. He wants to go for his walk. If I ignore him, he goes to lie down..disappointed.

When I do come out for that walk, I pick up his leash and then he comes alive..tail wagging furiously. If he's out in the yard and sees me pick it up he comes running as fast as his legs can carry him. He loves his walk. He keeps me walking at an almost uncomfortable pace....but that's good for me.

He's quite a dog. Sometimes he comes to the window and puts his front paws up on the sill and looks in at me. He just wants company. I'd let him in but he smells bad. I don't know what to do about it. Even when it was warm enough for his bath and we bathed him twice a week, it wasn't long and he smelled bad again.

He's a real sweetheart but he still smells bad.
Posted by Margie's Musings at 2:35 PM 10 comments:

We went to church this morning and following the church school class, we had our election of officers. I was elected to be pastor again. We had a good sermon and after church we went to Hong Kong delight for lunch. That might not have been the best choice for Bob's diabetes. He tested at 255 and hour or so after lunch.

Then we went to an Open House at one of the retailers. I bought my first Christmas gift.

I spent the afternoon sending out letters to those who did not attend to tell them the results of the election and bring them up to date on the congregational Thanksgiving dinner next Sunday after church.

Tonight at 7:00 we will attend our "Living the Questions" group at Keith and Joyce's.
Posted by Margie's Musings at 3:40 PM 4 comments: