I leave tomorrow for Independence, Missouri where I will attend the Peace Colloquy. I have four friends going too. Jack and Marilyn and Marilyn's sister, Annie, and Sheri, who I will be staying with up there. I expect it will be a great experience. Those always are so well planned.

Yesterday Juanita called and canceled breakfast. She had fallen and bruised herself all up. So I took Bob with me and after my hair appointment, we had breakfast at Eggberts. Luckily Juanita didn't break anything. She fell on the hip she broke back when she was 76. She is 88 now. She is having hearing problems so I will take her to the doctor in Bartlesville to the specialist on the 29th following our in service at the hospital here. Her appointment is at 3:00 and the in service is over at 1:00. I will leave immediately after that and go up to Independence to pick her up for our trip to Bartlesville.

After breakfast, Bob and I shopped at the Dollar Store and Dollar Tree for some things we could not get at Wal Mart on Tuesday. Then we came home and I baked cookies for the luncheon today at the Episcopal Church. The Cultural Arts is sponsoring it and we will support it.

Scott is coming this weekend and will stay here with his dad. If he gets in early enough, they will eat at Tavern on the Plaza. He has a date on Saturday at noon in Bartlesville. This girl is from Barnsdall, which is just south of Bartlesville. They plan to eat at Garfield's and then go to Woolaroc if that is what they decide to do. He wants to do something where he can visit with her and get to know her. A museum will be ideal. I will miss seeing him but I have nothing except Thanksgiving planned for November so I can see him then, perhaps on the 7th.
Posted by Margie's Musings at 8:41 AM 2 comments: 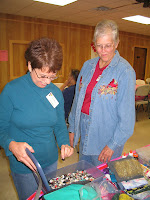 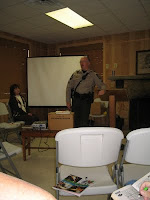 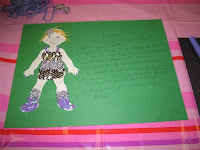 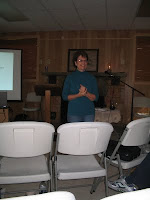 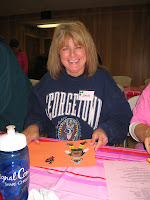 I sat with my sister this morning as usual and then Bob and I went to Independence to take Leslie to lunch and then after that we went to the market there and bought our week's groceries.

Bob is gone right now to get a haircut and pick up the milk.

I want to post some of the photos I took at the women's retreat this weekend. I will post one of my daughter, Leslie while I'm at it.

We had a great communion service on Sunday morning but I had left my camera in the room and didn't get any photos of that group.
Posted by Margie's Musings at 3:27 PM 2 comments:

Well, it was a wonderful weekend retreat. It was so good to get away and have some time with just my daughter and 50 some other women. The retreat was very well planned and executed. The spiritual uplift was great and the food was very good too and I'm now afraid to get on the scale....especially since I'll be gone again next weekend to Independence, Missouri to the Peace Colloquy.

We got home about 4:00. The retreat broke up at 11:00 AM following the communion service. Leslie and I went in to Joplin to the Olive Garden and had a salad. We had eaten so much over the weekend that we didn't want anything else.

Then we went to Penney's where she found the window treatment for her dining room window. She also bought a couple of pictures for the south wall which had nothing on it at all. They picked up the colors in her new curtain. We then went to another store where she bought a plaque to go over the pass through window into the kitchen and a new back door mat for the door leading into the living room from the deck.

From there we went to Crackerbarrel where she picked up her two rockers for their front porch. I bought the seat pads. We secured them in with our sleeping bags beneath them for padding. She had brought some new tie downs so they wouldn't move around and get scratched.

After that, we all went to Jack and Marilyn's for soup for supper and our regular "Living the Questions" class, which Jack led. One of our number is Muslim so we had a very interesting discussion about the similarities between our religions.

When we got home, I was very tired. I read awhile before going to bed.
Posted by Margie's Musings at 7:53 AM 3 comments: