Bob and I went to Bartlesville again today and walked the mall (a trip of 40 miles) and ate lunch there. I also bought gas there since it was 149.9 there and it's 169.9 here in Kansas. Then we came home and read all afternoon. It was 47 degrees so we let Slinky out for the afternoon. It's cooling off now so I just put him back in.

While he was out this morning, I scrubbed the kitchen floor...not that it will do any good since he's back in now but I feel better about it.

It was a nice respite to have a warmer day. I may be able to make it through the winter if we can have a nice day every couple of weeks. It's supposed to turn cold again tonight.

Tomorrow, Bob has a class for board members at Red Cross so he will be busy. I don't know what I will do. Maybe I will read some more.

I get very bored in winter. My idea of a good time is to dig in the yard and plant flowers.
Posted by Margie's Musings at 4:42 PM 2 comments:

My daughter and I are going to take a chance on the weather today and drive over to Joplin...a 75 mile trip. She wants to do some shopping at the mall and we have a member of our church in the hospital there so we will visit her.

The forecast was for freezing rain and it was supposed to have arrived last night but it's 8:55 and we didn't get any freezing rain. She googled Joplin's weather and they say the roads are clear. So we'll see. Bob doesn't want to go for a change because he hates to shop. He will stay home with the animals and let them in and out as they have needs.

This week featured the expose' that Wall Street money manager, Bernard Madoff, had scammed billions of dollars from investors by using a Ponzi scheme. Worse yet, he had not complied with the regulations that are required of money managers and no one had insisted he comply. But this is not the only evidence we have seen of greed and gross corruption. Think of the entire mess that came out of Wall Street this year. This financial center has been admired world wide and now big name companies such as Lehman Brothers, AIG and Bear Stearns have been discovered to be completely incompetent and grossly unethical

Where was the Securities and Exchange Commission while all of this transpired? Why did they miss so many clues? What happened to the high standards we expect of them?

The Madoff scandal is just “the blow that killed Willy”, as my mother would have said. This entire financial meltdown just points out gross incompetence that really shouldn’t have been bailed out. Those companies that were bailed out are still not making loans to assist businesses or ordinary citizens. Instead they are paying dividends to their stockholders with our tax dollars.

More than a financial bailout, this country needs an ethical bailout. It was a huge mistake to eliminate the many regulations that kept the financial markets from abusing the system. Free markets are fine as long as everyone is honest but obviously this is not a perfect world.

But the ordinary citizen is also to blame. Not only have so many borrowed money they knew they could not repay, but most of the country lives on either borrowed money or on credit cards. Note all the Rent to Own companies and Payday Loan companies that are thriving on fleecing the poor. And don’t get me started on credit cards with their huge interest rates. Where is the regulation that keeps the banks from raising the interest rates to unfair heights? No matter which was you look, greed prevails.

The rich feel the rules don't apply to them. And let's face it, they obviously don't.
Posted by Margie's Musings at 6:59 PM 2 comments:

Bob thought he should go with me for my hair appointment and meeting today. Juanita called and canceled our breakfast date. That was good. I was waiting until 7:00 to call her and advise against her trying it. She beat me to it.

So Bob went with me after I changed my hair appointment till 10:15. By then, it wasn't quite so treacherous. That's not a great idea. He's so feeble he wouldn't be much good to me if anything happened but it made him feel better so I guess that's good enough reason to let him go. Then we ate at Calico Cafe after the meeting and then went shopping for groceries for Christmas.

My meeting went well at 11:00 and we got the Martin Luther King Worship service planned. We will have one more meeting on the 7th of January. The service will be held at the Church of the Brethren in Independence on the 18th instead of the 19th. That's a Sunday evening and we thought attendance would be better.

I spent the day with my sister. She is doing fine in the nursing home. When I left at 5:30 she still had not had her physical therapy. The therapist was in the house but he had not got to her yet. She had her nightgown on and was ready to go to bed. My brother-in-law came and he convinced her that if she went to bed at 5:30, she would be up at 4:00.

It was a pretty boring day. She told me everything she told me at least three times. She is really showing her Alzheimer's Disease. I feel really sorry for her though.

I got home and fixed myself a cup of tomato soup.

Tomorrow I hope to make it to Independence for my hair appointment. If I can't, I will have to wash my own hair.
Posted by Margie's Musings at 6:24 PM 2 comments: 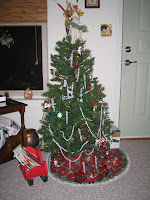 This has been a 10 degree day. I went to town this morning and bought stamps and mailed some notes. Later I went by the nursing home and visited my sister for an hour. Then I came home and worked on our daughter's scrapbook and got it caught up before dinner.

Slinky has been in all day. Every so often he barks once to let us know he needs to go out to do his duty. The cat, Missy, goes out from time to time too but neither can stay out long.

Tomorrow, I will go to the nursing home sometime between 8:00-9:00AM and stay the day until my brother-in-law gets off work.

I do not like winter. The older I get, the less I like winter. I understand why folks move south when they get older. When we left Bobby and Karan's last night the steps were covered with ice and it was sleeting. The sidewalk was also covered with ice so we crossed on the lawn. I was glad to get home although I enjoy "Living the Questions" a lot. We surprised two members with birthday cake and ice cream and a card shower.

I'm beginning to receive quite a lot of Christmas cards. I had put up my little tree several weeks ago. My living room is so small that I had to buy a small tree to fit into it. This is a photo of it.
Posted by Margie's Musings at 6:06 PM 2 comments:

We had a small congregation at church today. I don't know where everyone was. Well, those who did come were the most faithful ones. After church, we went with our daughter and son-in-law to El Pueblito, the local Mexican Restaurant. Afterward, Bob watched the football game while I did my "we missed you at church today" notes. I went to the market to buy some more stamps but they were completely out.

We have "Living the Questions" group tonight. It is to be held at Bobby and Karan's home. We will have a short birthday party for Judy and Marilyn, who both have birthdays this week.

It was 60 degrees here today and it is supposed to get down to 20 tonight and tomorrow. We will keep Slinky in the kitchen tonight. I guess he will be kept in the garage while we are gone this evening.
Posted by Margie's Musings at 3:00 PM 4 comments: