O.K.,  I have been gone for a week and just got in after midnight last night. It was a magnificent cruise to Alaska. The trip to Seattle was uneventful and pleasant. This was a bench we saw outside our hotel in Seattle and Scott really liked it. So I took a photo of it thinking Ginger (who is the handy person in that relationship)  might duplicate it for their new home.

The first day of our trip was our departure in Seattle. And we cruised from there to Alaska.

This was our cruise ship.


On day two we simply cruised and enjoyed watching the beautiful scenery go by from our balconies. This was the inside passage.

Day three, Monday, June 18th, was more simply sailing and seeing some extremely scenic land. The third day we also docked in Juneau and also went whale watching for humpbacks . We actually saw quite a few! 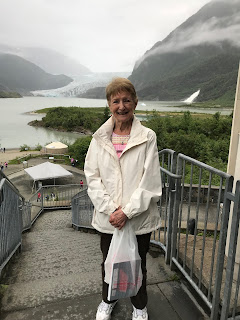 We took a tour bus and went to see the Mendenhall glacier. The kids walked down a road for a couple of miles. I went through their visitor's center and enjoyed the tour there.  Here is the glacier. I am standing in front of the visitor's center there. While I was there, I bought a book called "Romeo, the Friendly Wolf" and read it. It's a true story and is listed on the New York Times best seller list. This memorial and the book about him is found at the Mendenhall Glacier Visitor's Center.

Day four, on Wednesday, we docked in Skagway and rented a jeep to do our own sight seeing. We went on into Canada that day.We saw a small town there called Carcross and looked around in it and also took a photo of a trading post. We had our passports stamped there and drove on to see Emerald Lake. We also saw a bear in the middle of the highway.  Here we were at Emerald Lake. Then we stopped on the way back to the ship and Linda bought our lunches. 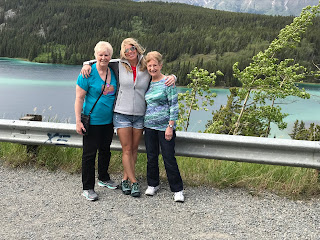 Here is a  place for my image of the bear we saw on the highway. He walked right up to the jeep.

Day five we sailed to Tracy Arm Fjord to see the glaciers there.They were spectacular!

Day six we were at sea again and saw more magnificent land. We ate a lovely dinner each evening on the ship. This is Scott and me at one of those dinners. 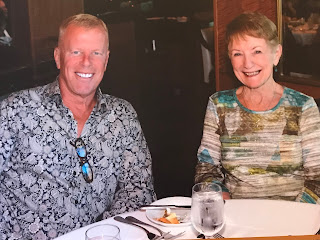 Day seven we docked at Victoria and went into Canada for a trip out to sea and whale watched featuring Orcas. That ship was determined that we see some Orcas so they went out further then they usually do and actually ran out of gas and had to call two smaller ships to come get all 105 of us. It was a hoot! 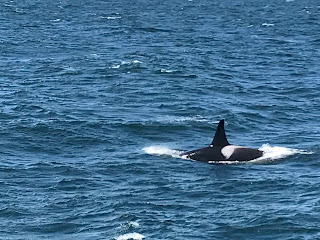 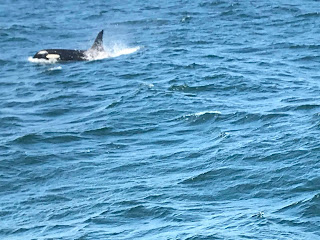 We also saw a lot of bald eagles on our trip. I didn't get a close up of one of them but this one came right out of the captain's blog from the day he took us out Orca watching.

Day eight we traveled back to Seattle for our trip home. It had been a trip of the lifetime and I thoroughly enjoyed it.

I flew out of Seattle on Alaska Airways and then on to Tulsa from Chicago on American Eagle.

My son-in-law, John, picked me up at the Tulsa airport.   My luggage is back in Seattle so I am not sure when they will get it delivered. When they do, I will choose some more of my photos and post them. These were basically Scott's.

In fact, it may be awhile. I had the camera downloading part equipment in my luggage.

Ginger just texted me that they are supposed to deliver it before 9:00 tonight.  Hooray. That luggage belongs to John and Leslie.

As it turned out my luggage didn't come until 11:40.  I usually go to bed at 9:00 so it was very hard to stay up and wait for that delivery but I was afraid to go ahead and take my  shower for fear he would come before I got finished. So I stayed up. Marilyn, my neighbor, who knows I go to bed early called to make sure I wasn't sick. I thought that was very nice and thoughtful of her.